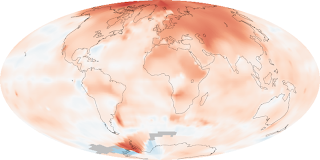 I spend a lot of time thinking about other people's opinions. I'm always reading polls and comment threads, trying to get a sense of how others see the world. It's not that I'm intrinsically interested in John Q. Public's worldview. In fact, sometimes I find it pretty disturbing. But I feel like I have to pay attention, because opinions matter--they determine, at least in part, how people will act. And how people act will determine our future. There are 7 billion of us on this planet now (up from 6 billion just over a decade ago). If too many people believe things that are at odds with reality, we're going to have a collision with reality, and reality doesn't budge.

One of the opinions that worries me most is the idea that environmental issues like global warming or deforestation are not real problems, so we don't need to worry about them. I've gotten more tuned into this the last couple of weeks, after reading the following: "A new paper in the journal Science finds that climate change is now set to occur at a pace "orders of magnitude more rapid" than at any other time in the last 65 million years." 65 million years. If that's true, then many plants and animals may not be able to adapt fast enough to changing climate, as they have in the past. That's a scary thought. And Science is not some radical environmentalist magazine. It's arguably the most influential and respected scientific journal in the world. So that article got my attention.

One of the most commons reasons for denying global warming was stated unusually plainly the other day by Rush Limbaugh: "See, in my humble opinion, folks, if you believe in God, then intellectually you cannot believe in manmade global warming … You must be either agnostic or atheistic to believe that man controls something that he can’t create."

Obviously that isn't true; lots of people who believe in God can and do believe in global warming. And we clearly affect many things we didn't create. We didn't create the passenger pigeon or the dodo, but we sure did kill them off. So, Rush's statement is demonstrably wrong. But doesn't mean his views are uncommon. I suspect a lot of religious conservatives use a similar thought process: God is in charge, and He will determine the ultimate fate of the earth and humankind. Many literal-minded Christian conservatives believe the world will end as described in the book of Revelation, and perhaps soon, so worrying about other potential catastrophes is silly (many seem to look forward to it, which scares me more than anything in the whole world.) Others believe mere humans couldn't significantly alter what God created, so things like global warming can't possibly be real.

Others deny global warming for different reasons. One is just plain old wishful thinking--I don't want it to be true, therefore it isn't. Another common reason, I think, is that global warming conflicts with free market ideals. Those who believe that free markets can solve most of the worlds problems don't like to think a major global issue could arise despite free markets, or even because of them. The much-lauded Invisible Hand of the marketplace isn't supposed to turn around and slap us. I suspect that's what motivates most libertarians who deny global warming, since they don't tend to be especially religious, and they don't usually deny other well-established scientific theories. Conservatives may be motivated by both the religious and the free-market arguments. I think those are the main ideological reasons for denial in the United States, but in other places people surely deny it for other reasons. I imagine there are Marxists who deny it because it would conflict with the vision of the inevitable triumph of socialism.

In any case, the main point here is that these opinions are motivated by ideology. Why else would people oppose global warming more than other modern scientific theories, like plate tectonics or the expansion of the universe? Why single out global warming? Because it conflicts with a pre-existing ideology, that's why. Non-scientists who deny global warming rarely do so after unbiased, careful consideration of the evidence. Instead, they begin with a conclusion--global warming is not real--and then look for arguments to support that conclusion. And those arguments seem convincing, at least to people who want to believe them and don't want to look for contradictory evidence. It's confirmation bias in action--seek out arguments that support what you already believe, and disregard those that don't.

That's the opposite of how science works. Science, at least in theory, proceeds by observing the world, noticing certain patterns, and then formulating hypotheses to explain those patterns. Then the hypotheses are tested, and if they fail, they are (eventually) discarded. The ones the scientists can't knock down are the ones they keep. Of course, scientists are only human, so in the real world it's messier than that. But the process still works amazingly well--well enough to give us the know-how to land a robot car on Mars and eradicate smallpox, to give just two examples.

Science is an astoundingly powerful method for understanding the world, and the people who use it to study climate have concluded that global warming is real and caused by humans. And here's the thing: they don't believe that because of some ideology they already had. They believe it because they realized how much carbon we're pumping into the atmosphere, wondered if it might warm the planet, and then started trying to figure out if it really does. And the answer most of them have come to is, "Yes, almost certainly." A few have taken an honest look at the evidence, and remain undecided, or even skeptical. That's fine--science couldn't function without honest dissenters, because sometimes they turn out to be right. I don't have any beef with them unless they're skeptical because of some other ideology. Then they aren't really doing science.

As for myself, I also believe in global warming, but not for the same reasons most climate scientists do. I understand the theory fairly well, but I can't honestly say I've mastered it, looked at all the evidence, and drawn an honest, educated conclusion. I've done that with simpler theories, like the theory of evolution (whose fundamental ideas really are very simple). But climatology is an unbelievably complex field, with all kinds of variables interacting in complex, counter-intuitive ways. I would have to immerse myself in it for months to have a truly informed opinion. So I go with what the majority of scientists think. I have enough faith in the process of science, with its checks and balances, to think that's a good bet. And like most scientists, I don't have any ideological dog in the fight already. In fact, I would much rather believe global warming isn't happening. But I simply can't help thinking it is. What I wish were true has absolutely no bearing on what is true.

I'm not saying people should or shouldn't believe in global warming. I'm just saying they should try to step back from whatever ideology they have and take the time to actually understand the theory--and the level of support it has among scientists--before rejecting it. Is that so crazy? A whole lot of people who reject it do so without coming close to understanding it. I know that because when the subject of global warming comes up, I've seen lots of people deny it...and then start talking about holes in the ozone layer. That's a completely different issue. Anyone who confuses global warming with ozone depletion hasn't understood either issue, and has no business making pronouncements about them. Most global warming skeptics I've talked to either reject it out of hand, without doing any research, or Google it and find a few reasons to deny it, without ever really understanding what the theory says.

That's a huge problem, because there's a whole lot riding on the theory. It has enormous bearing on the future of the whole planet. It's too important for knee-jerk reactions based on wishes or ideology. And it's not the only issue like that. There are all kinds of ways we could wreck the planet, and therefore wreck human civilization. It's not just global warming. In the last 60 years or so, humans have become fully capable of devastating, and possibly even ending, life on Earth. We could do it with nuclear weapons, or uncontrolled population growth, or runaway global warming, or any number of other screw-ups we only dream about now. This isn't hyperbole. This is realism. We're numerous enough and we're powerful enough to do it. As a species, we're like a child who's just found a stick of dynamite and a box of matches. We've suddenly gained a whole lot of power, but not the wisdom to control it.

We really are living in a uniquely dangerous period in human history; one in which our potential global impact has suddenly become explosive. If you don't believe that, I invite you to take a look at the graph below, which plots the human population over the last 12,000 years. Population isn't the only thing that has suddenly gone exponential. The growth in computing speed, scientific knowledge, and potential human impacts on nature are following similar curves. We're living in an age of explosions, and if we don't learn to control them, we will blow ourselves to bits. 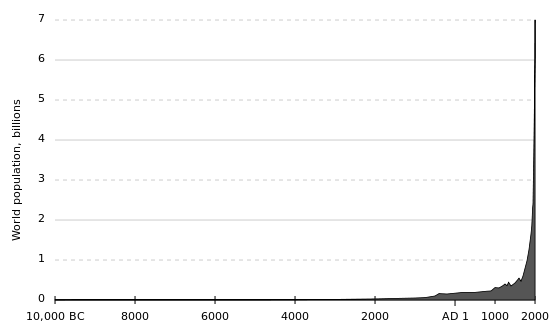 My main point in this post, then, is not about global warming. It's about the idea that catastrophic human impacts are impossible. That's probably the most dangerous notion I've ever heard of. It leads to apathy, overconfidence, and outright hubris in the face of very real problems. This idea--that God or the marketplace won't let us wreck the world--could wreck the world. It really could. Global catastrophes have happened before in Earth's history (just look up "mass extinctions"), and there's no reason to think they couldn't happen again. It's just that now we've become the most likely cause of the next catastrophe. As Pogo famously said, "We have met the enemy, and he is us." We no longer have the luxury of wishful thinking and comforting ideologies. We've got to learn to pay attention to what's really true, not what we think should be true, so our opinions don't put us on a collision course with reality.

Climate change: A guide for the perplexed - New Scientist (has a great list of common objections to global warming, and their rebuttals)

Posted by Ramblebrain at 7:56 AM