Skeletons of Mardi Gras: How the Walking Dead Are Keeping Traditions Alive in New Orleans 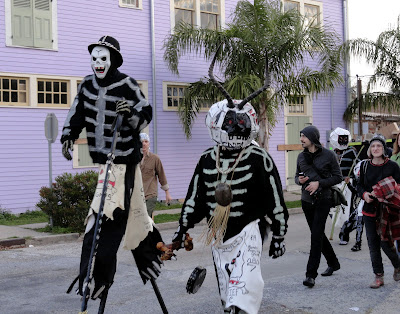 When I pulled onto Esplanade Avenue on Mardi Gras morning, the clouds over New Orleans were just losing their sunrise glow. I found a parking spot in the shadow of I-10, which sits right on top of Claiborne Avenue in the Fauborg Tremé neighborhood; one of the oldest predominantly black neighborhoods in the country. The famous Zulu parade would be be coming down Claiborne later, but that's not what I was here to see. On this most festive of days, I was in search of the walking dead.

Not long after leaving my car, I heard a faint crrrraww! sound to my left. Several blocks away, a handful of black-clad figures with huge white heads emerged into the street, and then vanished, followed by a small parade of brightly dressed onlookers. I pulled out my camera and ran after them.

The North Side Skull and Bones Gang were on the move.  Several African American men and boys were making their way down the street.  They wore black sweats with skeletons painted on them, and paper-mache skulls the size of beach balls. On their white butcher's aprons was a leering skull design. All of them carried big bones in their hands, which they used to bang on doors on either side of the street. One particularly scary looking Skull walked on stilts, making him at least nine feet tall. The leader, a big guy with antelope horns protruding from his skull mask, boomed in a deep voice “Skull and bones gang! Mardi Gras morning! Wake up!” Some of them shook tambourines and rattles, and one—I think the one on stilts, though it was hard to say with the masks--kept making the eerie crrrrawwwww!! call.

Doors cracked, and people peered out at the apparitions on the street. Most of the grown-ups smiled and said “Good morning”, or “Happy Mardi Gras!” Kids peeked around their parents, looking thunderstruck. “Get up outta that bed! It's Mardi Gras morning!” the bone men yelled, “You gotta get your life straight!” 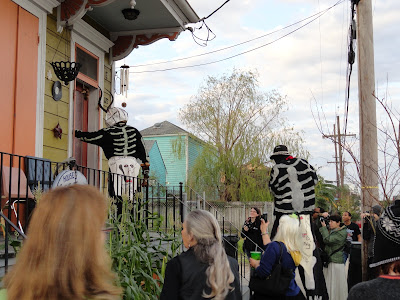 The North Side Skull and Bones Gang are the best known of several “skeleton gangs” that roam the streets of New Orleans on Mardi Gras morning. They claim to be the oldest skeletons, tracing their history to 1819. If so, they've been waking people up on Mardi Gras morning for nearly 200 years. But they aren't just trying to get the party started. They have a serious message, too. As they walked down the street, they greeted people emerging from doorways, shaking hands, patting backs, and bending down to talk to kids. I couldn't hear most of what they were saying, but based on what I've read, they tell them to be good, stay away from drugs, and do their homework. If they don't, they say, the bone men will come back for them.

By appearing as the walking dead, the bone men remind people--young and old—to live well while they're alive. As the words on their aprons say, “You next!” Sometimes they dance in a circle and chant “You better get your...life together, next time you see us...it's too late to try!” 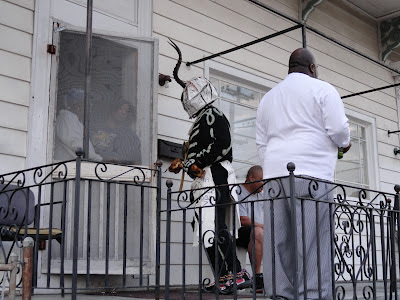 Not everybody welcomed the Skulls that morning, though. When they banged on one door, an irate white woman with a Midwestern accent appeared and said, “Why are you doing cop-knocking first thing in the morning? I had to stuff all my s**t under the couch, what the f**K!?”. The leader of the Skulls, somehow looking disgusted through a giant paper-mache skull mask, said “Then move outta the city.” All the onlookers nodded in agreement. Another woman, whose husband opened the door and shook hands with some of the Skulls, pointed at the leader and said, “Don't touch me.” I couldn't hear what she said next, but she seemed to think the Skulls represented black magic or devil worship. I heard the big Skull in the antelope horns saying, “No, no, that's not what we're about.”

It's hard to pinpoint the cultural origins of the skeleton gangs. Some sources vaguely suggest that the North Side Skull and Bones Gang was started by a merchant marine from New Orleans, who witnessed the Day of the Dead celebrations in Mexico, and decided it would be perfect for Mardi Gras. If that's true, the tradition was borrowed from a combination of old Aztec celebrations (the Aztecs being big on skulls) and European traditions like the Danse Macabre motif in art, and the idea of the dead becoming restless during the three day period of Halloween, All Saint's Day, and All Souls Day (October 31-November 2). One of the Skulls I talked to later that day, however, said the tradition was related to Lent, and that skeletons are a reminder that the pleasures of the flesh—the carnal things celebrated at Carnival—are fleeting.

But I suspect there's more to the story. New Orleans is often called the most unique city in the United States, and most people assume that's because of its French heritage. They're partly right, but New Orleans preserved more than French culture. It also preserved African culture; more so than nearly any other place in North America.  Under French (and Spanish) law, slaves had more extensive rights than in the Anglo-American south. One result was that they were allowed to gather on Sundays for dancing and drumming at the place now known as Congo Square. This would never have been allowed in Anglo-America. The Congo Square gatherings helped preserve rhythms that mostly disappeared in other parts of the United States; rhythms which reemerged in Mardi Gras Indian chants, jazz, and rock and roll. If New Orleans preserved this musical aspect of African culture, there's every reason to think it preserved other aspects, including African religion. After all, African music and African religion aren't easily separated. One of the functions of the drums was to call forth the spirits. Those drums certainly fill me with the spirit.  I don't happen to believe in the kinds of spirits the Congo Square drummers believed in, but I can see how they came to believe the drums allowed transcendent spirits to enter their bodies.  I mean, it's a pretty accurate description of what it feels like.

One of most important African religious traditions to be preserved in New Orleans was Voodoo. Just to be clear, I'm not falling for the Hollywood version of New Orleans Voodoo here. Most of the “Voodoo” you see in the city today is strictly tourist kitsch.  However, Voodoo (or Vodou, or Vodun) is a real religion, and it did play a role in New Orleans' history.  Voodoo originated in West Africa, and is still an important religion in some countries there, especially Benin.  It was blended with Catholicism and Native American religions to produce produce Santeria in Cuba, Candomblé in Brazil, and Voodoo in Haiti.  Voodoo came to New Orleans with slaves, soon after the city was founded. After the Haitian revolution, many white refugees fled to New Orleans, bringing slaves with them. The Voodoo tradition was even stronger in Haiti, of course, and remains the predominant religion there to this day. The 1800's were the heyday of influential Voodoo practitioners in New Orleans. The most famous was Marie Laveau, whose tomb is in St. Louis Cemetery Number 1, right next to Congo Square.

In Voodoo, there is a supreme god, who stays remote from human affairs. Lesser spirits known as Loa are the ones who deal with people. One group of Loa are the Ghede, who are simultaneously spirits of death and fertility. The Ghede are a sort of family, often pictured as skeletal figures wearing black and purple. They're a wild bunch; drinking spiced rum, dancing the suggestive Banda dance, and swearing profusely. They are the spirits of fertility, but they are dead, so nobody can punish them for their lewdness. They can do what they want. Interestingly, many of the Ghede, especially Papa Ghede, their patriarch, are very fond of children. The Ghede are closely associated with the more powerful Loa, Baron Samedi (Baron Saturday) and his wife, Maman Brigitte. These two resemble the Ghede (and are sometimes considered a part of them) with skeletal faces and black clothing. 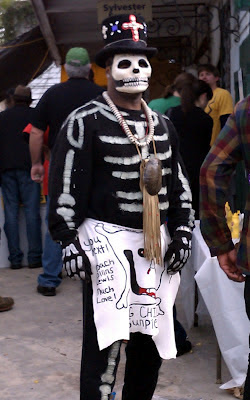 When the Skulls finished their rounds on Mardi Gras morning, they returned to the Backstreet Cultural Museum in the Tremé, just across Armstrong park from the cemeteries and Congo Square. Their leader, Bruce “Sunpie” Barnes, traded his giant skull and antelope horns for a skull mask and top hat with a cross in front. Now he clearly resembled Baron Samedi or Papa Ghede. Barnes seems to see the Northside Skull and Bones Gang in terms of the Ghede tradition. In interviews, he explicitly links the skeleton gangs to the Ghede tradition in Haitian Voodoo.

I don't know if the skeleton gangs really originated with the Ghede and Voodoo.  It's intriguing that both the Ghede and the skeleton gangs (or at least the North Side Skull and Bones) seem concerned with the welfare of children. But maybe the tradition originated from multiple sources: African, Catholic, and perhaps even Aztec (if the Day of the Dead connection is true). All these traditions were influencing each other well before New Orleans was founded. Besides, people tend to come up with similar ideas independently. If you believe the spirits of the dead remain after the body dies, you could easily conclude that the dead had lessons to teach us. One piece of advice they might offer is to live life fully, and not join them sooner than necessary. This sort of idea has surely occurred to people around the world.

Whatever its origins, the North Side Skull and Bones Gang today seems mostly concerned with maintaining the traditions and culture of black New Orleans, by encouraging young people to participate in that culture, and by warning them away from the drugs, guns, and violence that are all too common there. The people involved seem quite capable of making a difference. When I started reading about the Skulls after Mardi Gras, I realized how talented some of their members are. An older gentleman I spoke with turned out to be Ronald Lewis, the creator of the House of Dance and Feathers, a museum of black New Orleans culture in the 9th ward. Another member is Royce Osborne, creator of an excellent documentary about Black Carnival traditions in New Orleans, called All On A Mardi Gras Day. Their leader, Bruce Barnes, is a park ranger at the New Orleans Jazz National Historic Park, a multi-instrumentalist who leads a Zydeco band called Sunpie and the Louisiana Sunspots, a former professional football player, and an important community leader.

All on a Mardi Gras Day

House of Dance and Feathers

Sacred Ground (a good article about the North Side Skull and Bones Gang, and the Tremé neighborhood)

Signs of Life (a photo exhibit featuring the North Side Skull and Bones)
Posted by Ramblebrain at 8:53 PM