Captain Stormfield and the Sky-Blue Man 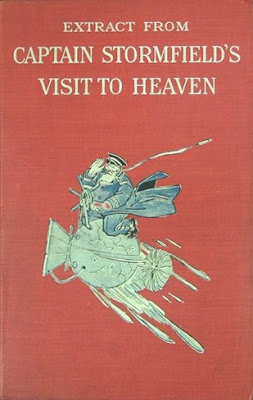 Last night I re-read Mark Twain's hilarious little novella, Extract from Captain Stormfield's Visit to Heaven. I first read it as a kid when my Mom gave it to me, telling me it had changed the way she thought about some of life's big questions. It had the same effect on me.

"Well, when I had been dead about thirty years," the story begins, "I begun to get a little anxious. Mind you, I had been whizzing through space all that time, like a comet." The good captain is on his way to heaven, but space is a big place, and though he estimates he's making a good million miles a minute, it's a long way. He's a boisterous old soul, and he gets a little bored, so he decides to race a comet. This takes him off course, and when he arrives at the gates of heaven, he's come to the wrong one. After waiting in line with "a sky-blue man with seven heads and only one leg", he finds that the attendent has never even heard of Earth. It turns out that beings from billions of other worlds also go to heaven, and the Earth is not one of the more prominent worlds. The attendents eventually figure out where he's from, and send him on his way, where more surprises await him.

As a kid, I was fascinated by the idea that God might have created other inhabited worlds besides our own. That kind of stupendous cosmic creator sounded a lot more God-like to me than the descriptions I heard in Sunday school. And it still does, though these days I don't claim to know if there's a God or not. If there is, I certainly don't think he created humans in his image. Our species has no business being that egotistical. But I can imagine him (or her) creating the universe knowing that intelligent life would eventually evolve on some worlds, or at least this one. I can also imagine that he didn't, but it's interesting to think about what follows if he did.

And no, I'm not going to turn this into an argument that God doesn't exist. I really am interested in thinking about what's likely to be true if he does. Let's assume for the sake of argument that God intentionally created a universe with intelligent life (and further assume we qualify as such). Now let's combine that assumption with a certainty: the unfathomable enormity of space. We share our galaxy with at least a hundred billion stars--more stars than you could count in a lifetime; many with planets circling them. And our galaxy is just one of countless others, some of which are behemoths containing over a trillion stars. I can't help thinking there's life out there in all that, even if life is completely random (which I think is likely). But I don't really know. However, if God intentionally created a universe with intelligent life, then I would think there really is life on billions of worlds.

That may seem like a surprising conclusion, and it doesn't seem to be common among theists. But why else would God have created all those galaxies, stars, and planets? If he created our world with some purpose in mind (and most theists think he did) then why would he have created all that extra space, if not to put life out there, too? Most just think of God as focusing on the creation of the earth, and humans in particular. But if that were his focus, why did he make all those other galaxies? Of course, I have no idea what's necessary when creating a universe, but still, making all that just to stick life on one little out-of-the way speck of dust--seems like a strange extravagance.

I guess what's fascinating to me about this idea is that I see most religious views of creation as far too small. The idea that God created this world all at once a few thousand years ago just seems so pedestrian next to the thought that it's millions of years older than that. It's like comparing a sand castle and the Great Pyramid. The literalist view of creation just doesn't do justice to the grandeur of the universe. Nature is more magnificent than that. But if my line of thought in this post makes sense, then a religious view of a purposeful creation should lead to an even more surprising view of the cosmos than a non-religious one. If the universe is random, then maybe living things on Earth are alone in the universe. I doubt it, but we don't have much of a basis for ruling one way or the other. But if life in the universe is purposeful, then we have good reason to think it's common. Unless you want to insist that God flung galaxies across space like so many billion grains of sand, just to put us on this one little particle, in one little atom, in one single grain. And what kind of sense would that make?