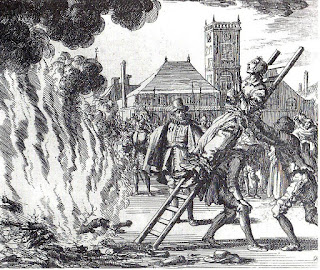 A couple of times recently I've heard the phrase "ideological purity", and thought, "That's really what some people want, isn't it?" Part of the reason our country is so polarized, I think, is that there are vocal minorities on both sides of the political spectrum who insist on ideological purity. They have an orthodoxy, and they try to enforce it. They view moderate and independent members of their own party as heretics (or at least dangerously lapsed), and they view the other party as infidels and villains so irredeemable that it's a waste of time to engage with them.

On the far right is a vocal minority that refuses to compromise on anything, and attacks more moderate conservatives, calling them "Republicans in Name Only" or even "cuckservatives". Or they accuse them of being slaves to political correctness.

Which brings us to the far left. While some conservatives have distorted the meaning of political correctness beyond recognition, and claim they're "not bowing to political correctness" when they're really just being rude or hateful, some on the left really do insist on a rigid form of political correctness. It is an orthodoxy, and they do try to enforce it. After all, the literal meaning of the words "politically correct" implies that there's a political viewpoint--and manner of speaking--which is indisputably the "correct" one. We've all seen the conservative speakers shouted down on liberal campuses, and even "ideologically impure" liberal professors have been targeted for their heresies. And have you noticed there's a whole genre of articles circulating on social media entitled "Why You Need to Stop Saying ________."?

Some on the far left really do try to tell others, across the political spectrum, exactly how they should be thinking and speaking. It may be worse on the left than the right, and I say that as a moderate liberal. Even as I write this, I'm wondering who will be offended by it, and whether they will write me off as a heretic. Do moderate conservatives have similar fears?

In any case, I think there are many problems with these attempts to enforce orthodoxy. One is that more moderate and independent types on both sides (who are actually the majority) are afraid to speak their minds, not for fear of being attacked by the other side, but for fear of being attacked by the orthodox wing of their own side. So there's fragmentation and bad blood within as well as between political parties, and the country grows more fragmented and dysfunctional.

But there's another problem with ideological orthodoxy that I want to focus on here, and it is this: Once you declare that one particular stance on an issue cannot be wrong, and should not be questioned, you have stopped reasoning about that issue. And once you declare that others can't question an ideology, you've said that they must stop reasoning, too. People with rigid ideologies may still be "thinking", in the sense of spending mental energy defending or elaborating that ideology, but if there is no possibility of changing their ideology, they aren't really reasoning. Because the whole point of reasoning is to discover truths you didn't already know. Isn't it?

And chances are, there's a lot we don't already know. What are the chances that either extreme on the political spectrum (which is an artificial construct anyway) in this particular country, at this particular time in history, has finally got it figured out? Not very high, if you ask me. The universe is far bigger and more complex than our little primate brains can easily grasp. I have undergraduate and graduate degrees in psychology, and if there's one clear lesson to be learned from psychology it's that the human mind is easily fooled. Our senses are woefully limited, and we fall prey to dozens of different perceptual illusions, cognitive biases, and logical fallacies. As a species, our ability to see the world clearly is so pitiful that for most of human history we didn't know the shape of the planet we spent every day of our lives on. We were so sure it was flat that we attacked the people who said it wasn't. We probably burned a few at the stake for it.

We know more now, of course (and we're slightly more tolerant of opposing views). There are things we can be confident of, but they're mostly things which can be empirically verified. We're confident enough now that the world is round, for example, that we can call it a fact. But most ideologies aren't entirely, or even mostly, factual. They're full of opinions about complex systems like economies and social dynamics that can't easily be pinned down empirically, as well as value judgments and ethical stances that may never be empirically testable. But you wouldn't know this when talking to the ideologically orthodox on both sides of the the political spectrum. They sound for all the world like they're talking about established facts, when they're usually just expressing opinions and forgetting the difference. (I've been guilty of this myself, of course).

And perhaps we can be confident of some things we can't really call facts. As I stop and think this over (that's the main reason I write these--to clarify my thoughts), I suppose there are some moral opinions that we can be pretty confident in, too. We can be confident that murder, rape, and slavery are wrong, for example--confident enough to enforce legal penalties against them. But these are clear cases that most people agree on, whereas many of the opinions people express as though they were facts really are just opinions, and not ones that most people can agree on.