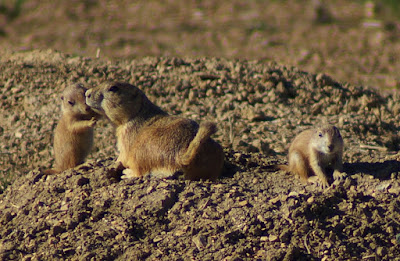 This past Thursday I was off work on a beautiful day in Colorado, and I was depressed. It was the National Day of Prayer, and Donald Trump was using it to sign an executive order promoting "religious freedom", which all too often these days means using religion as an excuse to discriminate. Meanwhile, the House of Representatives was using the day to vote for a bill that--if it passes the Senate and gets signed--will result in millions of people losing meaningful health insurance. And then there as a tweet by a former Republican congressman named Joe Walsh, saying "Your sad story doesn't obligate me or anybody else to pay for somebody else's health care." I figured that was a good summary of the way many Republican politicians think, and that was depressing.

So, I did what I always do when I get depressed and cynical about the human race, and took a hike. Getting out in nature always restores me. But this time, it was taking a while. I was walking along, stewing about the news and human cruelty, when I saw a litter of prairie dog pups playing, while their mother watched over them from their burrow. Every once in a while one would run back and nuzzle its mama, and then go play again. They were having a blast, and my dark mood vanished instantly.

I thought, "However ugly humans can be, there's still all this joy and beauty in the world" Prairie dog pups have been spilling out of their burrows to play in the spring sun for millions of years. It's an ancient, rhythmic cycle of happiness that's older than humanity. And that's a beautiful, awe-inspiring thing.

So nature did its trick, and I was soothed. And I stayed that way, but my thoughts soon grew darker and more realistic. And here I need you to bear with my for a while, because I'm going to sound really cynical, but my ultimate point is not cynical at all. So buckle up--it gets ugly for a second. As I kept walking, I realized I shouldn't romanticize the prairie dog pups too much. I'm convinced they were feeling real joy as they romped, but their lives are hard. Coyotes, rattlesnakes, and hawks are out there hunting them, and not all the pups are likely to make it to adulthood. Plus, prairie dogs are plagued with disease. Literally--they get bubonic plague. And they're no angels themselves--they often kill smaller rodents who compete with them for food.

So I kept walking, still soothed but more sober. As I came around a small hill, I heard a strange snorting sound. I started looking in the bushes, hoping to see a badger (for some reason I was imagining badgers sound like that). But it turned out to be a deer. There was a group of mule deer browsing on the hillside, and one of them was snorting, shaking its head, and pawing at its face. And here was another reminder not to romanticize nature. Most likely, the deer had been attacked by a deer bot fly. While it was grazing on bushes, the fly--which mimics a bumblebee almost perfectly--had flown up and sprayed its eggs into the deer's nose, and its young had grown into bullet-shaped worms in a cavity in the deer's head. Now the deer was slowly snorting and coughing them out, so they could go on with their horrid little life cycle. The deer will probably be fine, but it's safe to say its life is no bowl of rose petals. That's why I always scoff when I see products that say they're safe because they're "all natural". Have people SEEN what nature is capable of?

But please stay with me, and don't get me wrong. Nature is beautiful and endlessly awe-inspiring, and I love it as much as anyone I know. But it isn't benevolent. It's not malevolent, either. It just IS. Organisms in nature evolve because they find a niche that's stable. That niche may be the "playful, lovable otter" niche, or it may be the deer bot fly niche (or the bubonic plague bacterium niche, for that matter.) Evolution doesn't have a preference, because it doesn't feel empathy. It doesn't say, "I can't make a fly that does that to a deer!" Nature as a whole does not feel compassion. What happens just happens, and sometimes it's pretty awful.

And I think many Republicans with a social-Darwinist outlook, like Joe Walsh of the Mean Tweet, think that's something humans should emulate. While some liberals romanticize nature by seeing it as benevolent, there's a subset of conservatives who look to the callousness of nature for an ethical example. And both are committing that most common of fallacies, the appeal to nature fallacy. The fact that nature does something doesn't mean we should. Mammals often commit infanticide. Male ducks practice what's euphemistically called "forced copulation". These things are absolutely natural, because they happen in nature all the time. Does that mean we should do them, too?

And that's my non-cynical point, if you've stayed with me this long: even if nature as a whole is pitiless, compassion and empathy do exist, and they can be cultivated. It doesn't just exist in humans. I believe a mother prairie dog feels compassion (and maybe even joy) as she watches her babies play. Many animals seem to be compassionate toward their close relatives. A few of the more brainy mammals and birds form friendships with non-relatives, occasionally even from other species. There's a whole theory of why this happens, called reciprocal altruism, but the point is that they've widened the circle of care beyond family. Humans have widened it even further. We, or at least most of us, are capable of looking at other sentient beings and realizing they are capable of joy and suffering, just like we are. If nothing else, sheer, cold logic should tell us that other people's hopes, desires, fears, and pains are just as real and intense to them as ours are to us. Why wouldn't they be?

Even if other animals are capable of this sort of realization (and I bet some are) there's not much they can do about it. We're different. We can look at nature's dearth of kindness and compassion and say, "That's not good enough." Once I came upon a dog stranded on a pillar of rock. Its owner told me later it had been missing for a week. Nature would have let that dog die, but I didn't. I got it off that rock and got it some food and water. And you would have too. And that is an amazing thing. Think about it: we are a part of nature that is actually capable of seeing suffering in the world, and deciding to do something about it. We are, at least in this part of the universe, nature's conscience.

Or we could be. We have that potential. But history has shown that we sharpen nature's hardest edges as often as we smooth them. The worst of us have invented cruelties nature could never match, because nature isn't cruel. It may be mostly compassionless, but it doesn't revel in the pain of others. Some people unfortunately do. So, cruelty, like kindness, is also a rare element in the universe, and I think most of us are capable of both under the right circumstances. There's a darkness in us darker than anything in nature, but there's a light in us, too. That light is composed of things like compassion, kindness, and the ability to make the world a better place; to make life in it more worth living. Maybe it's a divine light, I don't know. Maybe it's the light in the Jewish idea of the broken vessels, and gathering and cultivating that light is the act of tikkun olam--repairing the world. Maybe that light is what Jesus meant when he said the kingdom of heaven is within. And maybe it's a happy accident? I don't know the answer, and I don't know that it matters. But I am pretty sure that humans have a choice between the darkness and the light inside of us. And I know which one we had better choose.
Posted by Ramblebrain at 10:04 AM