How to Make the Earth Seem Flat 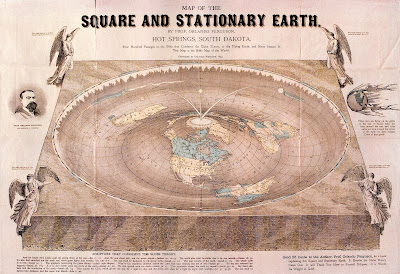 If you know me, what I'm about to say might come as a bit of a shock, so I'm just going to throw it out there: I kinda think the earth might be flat. Not only that, I think the sun and moon might be much smaller and closer to us than we've been told--maybe just a few miles above the earth. I know it sounds crazy, but I just can't ignore what I've seen with my own eyes. Before you decide I've lost my mind, just consider a couple of pictures I want to show you--pictures I took myself. Stay with me for just a minute, and try to forget all you've heard from the "experts" about the shape of the earth, and the distance to the sun and moon, and look at the evidence for yourself. 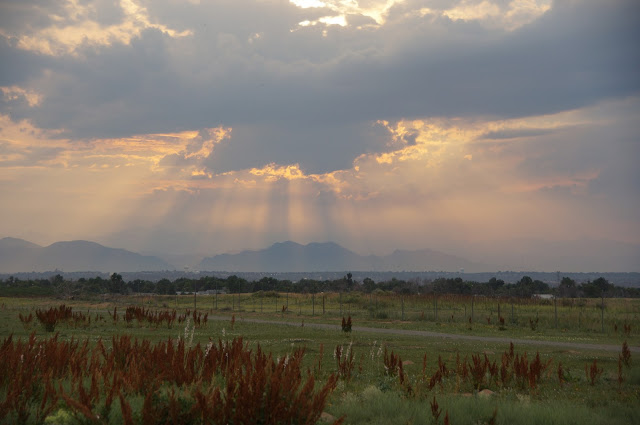 I took it from just east of Denver, looking toward the Front Range of the Rockies. I'm sure you've
seen sunbeams--technically called crepuscular rays--before. But have you ever wondered why they diverge outward like this? They shouldn't do that. If the sun is really 93 million miles away, and much bigger than the earth, then sunbeams should be almost perfectly parallel. Any divergence as the rays cross the relatively tiny distance across earth would be miniscule. But these clearly aren't parallel. If you really look, and forget what you've been told, you can see that they seem to be coming from a small source not that far above the mountains. The foothills in the foreground in this image are about 3,000 feet higher than the plains. If you use them as a ruler and count upward, you can see that the source of the sunbeams is about 6 times as high as the mountains--say, 18,000 feet up. That's nothing! There are clouds higher than that! And that brings me to my next picture: 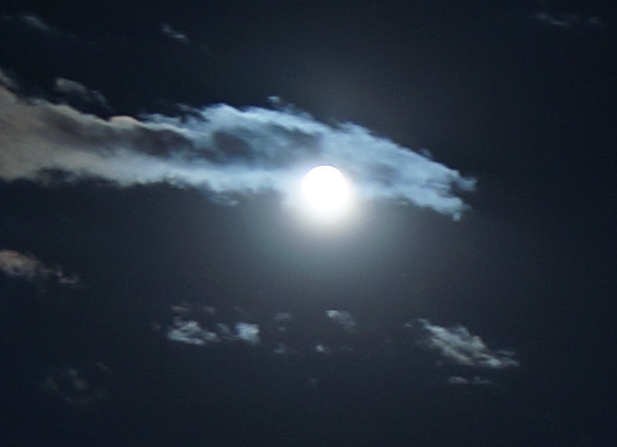 It's a picture of the moon, and it's definitely not going to win any photography prizes. I'm sharing it
because I took it myself, so I know it hasn't been doctored in any way except that I cropped it to give a closer look at the moon. And "close" is the operative word here! If you look at that image, you can clearly see that the cloud in the picture is behind the moon! How could that be if the moon is over 200,000 miles away? If clouds are behind the moon, it can't be more than a few miles up. Maybe that sounds crazy, but should I just disregard the evidence of my own eyes...evidence I can capture in a camera and share with you, so you can see it for yourself?

The answer is yes, yes I should, and so should you. It's time to come clean: I don't really believe the earth is flat, or that the sun and moon are just a few miles above us. I did take both of those pictures, but what they to show are illusions. The first one, with the sunbeams, is one of the most compelling optical illusions I know. As I said, if the sun is really huge and millions of miles from earth, then its rays should be almost perfectly parallel; as parallel as a set of train tracks. And they are. The picture below shows crepuscular rays from space as the sun sets. They are clearly parallel. But if you were standing on the earth's surface, they would appear to diverge, for the same reason train tracks appear to diverge: perspective. The apparent divergence is a mind-boggling illusion, but an illusion nonetheless. This video explains it in more detail (and in a pleasing Scottish accent.) 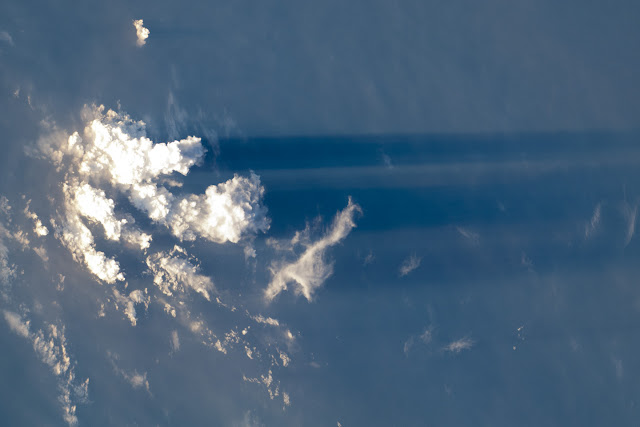 As for the image of the clouds behind the moon, that's a little easier to explain. The disc of the moon at night is simply quite bright compared to the surrounding scenery, and many clouds are partly translucent. When clouds appear to be behind the moon, what's happening is that the moon is shining through the clouds. In a photograph like the one I shared, the moon's bright disc is so overexposed that you can see no trace of the clouds in front of it (you can't see the moons craters and valleys, either.) This article and video explains how the effect happens (it actually discusses the sun, which can also seem to be in front of clouds, for the same reason).

So, why am I messing with you like this, pretending to think the earth is flat, and the sun and moon are just a few miles above out heads? I'm not just being a troll, I hope. The point I want to make is that it's really easy to cast doubt on sound, established scientific facts. The earth is round, vaccines save lives, the earth is getting warmer, and life evolved through a process of evolution by natural selection. These are all well-established tenets of modern science, but if you want to find apparently compelling arguments against them online, you can. (In fact, the arguments against them are easier to find than the arguments for them). And if you're like me, reading these anti-science arguments will give you a deeply uneasy feeling. You'll think, "This sounds kinda reasonable. What if I'm the one that's deluded here?" Perhaps you had a similar feeling reading the first part of this post, for which a more honest title would be "Why I Think the Earth is Flat...for Just a Second...When I Talk to Flat-Earthers." If you're like me, you go around assuming that most people are basically honest and have a firm grip on reality. So if someone shows you apparently-compelling evidence that the earth is flat, you may start questioning your own grip on reality. I do, anyway. It's the same reason gaslighting is an effective--and truly evil--way of making someone question their own sanity. A flat-earther who makes you seriously consider his arguments may not mean to be gaslighting you, because he believes them himself, but that's effectively what he's doing.

As I mentioned, this gaslighting effect happens because we tend to think most people are basically honest and in touch with reality. Sadly, this isn't true. Some people are unabashed liars, but what's far more common is that otherwise-sane people are simply delusional about some things. This is natural. We are small creatures in a very large, complex universe, and our brains are easily fooled (for evidence of this, take a look at these optical illusions). We are so easily fooled that for most of human existence, common sense said that the planet we spent every day of our lives on was flat. And common sense was wrong. That's how limited our perception is. That's how prone to illusion we are. Science is a way of expanding our perception and systematically finding and dispelling our illusions. But many don't see it that way. They trust their own perceptions far more, and see science as a vast and sinister plot, cooked up by an global elite to make money and lead good people astray.

For example, I just had a conversation on Facebook with one of these people--a man who truly does believe the earth is flat. And he wasn't totally insane. He could express himself rather clearly, and he seems to be a fairly functional member of society. Yet he believes in a vision of the cosmos that's been debunked since Aristotle. Not only that, but he also believes that everything we've been told about a round earth is part of a massive, sinister conspiracy: The moon landing was faked. Satellite images of a round earth on the evening weather are faked. Antarctica is a giant, icy wall encircling the flat disc of the earth, guarded by NASA to keep people from learning the truth. He is sane in many ways, but on this topic he is utterly delusional.

The problem is that for a while, he can sound somewhat convincing, by repeating some of the same claims I repeated above. Because our brains are so prone to illusion, it's easy to find very bad arguments that can seem very convincing, and can be very hard to refute. And it's not just flat-earthers. Many other delusional people can sound just as convincing, and the Internet is full of their arguments--sometimes presented on very professional-looking websites. And that's what really worries me. In an age when we've defeated smallpox, landed remote control cars on Mars, and cracked the genetic code, more and more people are rejecting basic tenets of science, because they're reading anti-science websites on the internet. The ranks of flat-earthers, moon landing conspiracists, and antivaxxers are growing. It's enough to make me worry that the wonder of modern technology known as the Internet could usher us into a new Dark Age of ignorance and superstition, where people reject the hard-won discoveries of science in favor of something they saw by some guy with a YouTube channel. It may sound far-fetched, but it's happening all around us. And we have to find a way to stop it. Whatever problems the world has now, we're a lot better off than we were in the Dark Ages.
Posted by Ramblebrain at 4:27 PM