Sticks in the Spokes: Things that Break Cycles of Hate and Violence 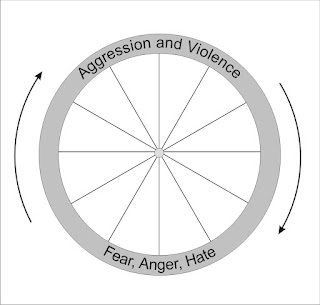 As I child, I never liked going to church, but privately, I was always fascinated by some of Jesus' ethical teachings. While I haven't been a believer since my late teens, lately I've gotten interested in Jesus again; not as a son of God or savior, but as an ethical thinker--even a strategic thinker. His instructions to be merciful and forgiving, to be a peacemaker, to love your neighbor and even your enemies, to turn the other cheek, and to follow the golden rule--these all seem truly profound to me. They have the kind of counterintuitive, almost paradoxical power that you also see in judo, or the nonviolent action of Gandhi or Martin Luther King. It's not just that they're nice or kind, though they are. There's something deeper going on; something more profound than simple benevolence. These teachings also display a strategic sophistication that makes them extremely practical, at least in some circumstances. They combine soft-heartedness and hard-headedness in a really beautiful way.

What I've realized lately about people like Jesus, Gandhi, or Martin Luther King is that they were brilliant, practical strategists, who found ways to turn kindness and self-control into powerful weapons against hate and oppression (perhaps "antiweapons" would be a better term). The things they proposed--mercy, forgiveness, compassion, non-violence, love, etc.--all do the same thing very well: they break vicious cycles of hate, anger, fear, and violence. These vicious cycles arise because those darker impulses feed on each other in a self-reinforcing, escalating cycle. We all know how it works: insults lead to anger, anger leads to insults, and then to more anger, and then push, and then shove, until it spirals out of control.

It's like the wheel in the picture, where anger, fear, and hate lead to aggression and violence, and aggression and violence lead to anger, fear, and hate, and so on and so on. One political party insults the other, who insults back and adds a touch of demonization, which leads to more insults and demonization, until you get to the point where we are today in the United States, where millions of people literally hate millions of their fellow Americans. And then there's the even more vicious cycle, where we respond to Islamic terrorist attacks by starting wars that hurt innocent Muslims, then some of them become radicalized and commit terrorist attacks. So we drop more bombs, and encourage more terrorist attacks, and on and on. Martin Luther King described this cycle well:

It's like fighting fire with gasoline--it just makes things worse. That's where things like non-violence, forgiveness, and loving your enemy come in. If hate and violence are a turning wheel, then these things are like sticks in its spokes. As Martin Luther King put it:

These sticks in the spokes of the wheel of violence may seem like weakness, passivity, or cowardice to the thick-headed, but they're actually incredibly powerful, and require enormous amounts of courage. It takes a strong, brave person to turn the other cheek rather than hit back.

All these things work in slightly different, but related ways to stop the wheel from turning. Mercy and forgiveness can stop it because the person forgiving renounces retaliation and hate, and the person being forgiven is not motivated to prevent, or respond to, violence with violence. Loving your enemies, or at least trying to understand their perspective (that's a whole lot more realistic, after all), is a way of defusing your own hate or anger, and allows you to see things from their point of view, if only temporarily. And that makes conversations with them more productive. Turning the other cheek, or at least responding to insults and aggression with politeness and restraint, works by shaming the aggressor; making them feel small and cowardly. The contrast highlights their own aggression, and uses it against them, the way judo uses an attacker's momentum against him.

Of course, there are problems with these tactics. The biggest, of course, is that people just don't want to do them. Because they're subtle and counterintuitive, and require restraint, it's hard for them to get very popular. Human beings find subtlety and restraint difficult at the best of times (I know I do--just because I appreciate how this stuff works doesn't mean I'm good at it). The fact that millions of people, for thousands of years, have cheerfully ignored the words of a man they think was God, shows just how difficult his instructions were.

The other problem with these tactics, unfortunately, is that they don't always work. Mercy and forgiveness don't work as strategic maneuvers if you're dealing with someone who won't return the favor. Turning the other cheek won't work with someone who will happily keep hitting you. Loving your enemies won't work if they take it as an opportunity to walk all over you. If you look at some of the things Jesus said (and Gandhi too, actually) he was incredibly radical about this stuff. Consider these verses from the Sermon on the Plain in Luke:


27 “But I say to you that listen, Love your enemies, do good to those who hate you, 28 bless those who curse you, pray for those who abuse you. 29 If anyone strikes you on the cheek, offer the other also; and from anyone who takes away your coat do not withhold even your shirt. 30 Give to everyone who begs from you; and if anyone takes away your goods, do not ask for them again.31 Do to others as you would have them do to you.
32 “If you love those who love you, what credit is that to you? For even sinners love those who love them. 33 If you do good to those who do good to you, what credit is that to you? For even sinners do the same. 34 If you lend to those from whom you hope to receive, what credit is that to you? Even sinners lend to sinners, to receive as much again. 35 But love your enemies, do good, and lend, expecting nothing in return. Your reward will be great, and you will be children of the Most High; for he is kind to the ungrateful and the wicked. 36 Be merciful, just as your Father is merciful.

This is some pretty radical advice. I don't know if Jesus was being deliberately hyperbolic, or if he really wanted his followers to go this far. Perhaps he did. In any case, I'm not going to give all my stuff away, or let someone who just hit me do it again. That's too radical for me, and I wouldn't expect anyone else to, either. But I still think it makes sense to take these things to heart, and follow them in moderation, because they really are both practical and kind, and that's a rare combination. No, it doesn't make sense to let people walk all over you, but it does very often make sense to forgive, to be merciful, to be compassionate, to be charitable, and to try to look for the good in people (most of them have some). It makes sense to be cool-headed enough to respond to aggression with politeness, because responding with aggression just makes that wheel turn faster. That doesn't mean being passive, or not opposing people who try to do harm (this is a key point--Gandhi and Martin Luther King practiced non-violent resistance, not passivity or appeasement). It just means responding to the fires of hate and aggression with water instead of gasoline.

And despite what the blustering macho men of the world may say, there's nothing silly or soft-headed about that--it's just good sense. It's a practical strategy that's worth doing even if you don't care whether you hurt your opponents or not. But if you do care, and you would rather be kind if possible, then it's got the advantage of being kind. And here's the thing: it's not just kind to your opponents, it's kind to you, too. As Kurt Vonnegut once said, "Hate, in the long run, is about as nourishing as cyanide." If you spend your time soaked in anger and hatred for your enemies or opponents, you're going to be miserable. Forgiveness is at least as good for the forgiver as the one forgiven.

The big trick, as usual, is discernment--deciding when it makes sense to use tactics like mercy, forgiveness, tolerance, non-violence, and loving your enemies, and when it doesn't. Again, I think it rarely makes sense to be as radical as Jesus and Gandhi were (Gandhi recommended non-violence even against the Nazis). Maybe what makes sense is to start with the easier, more moderate stuff. Not love--that's for experts. I really think too many people talk about love, when they haven't even mastered tolerance and non-hate. If you can't love your enemies, then at least tolerate them. If what they're doing can't be tolerated (and some things, such as extreme intolerance, can't be) then try not to hate them. Hate just causes poor judgement and makes the hater miserable.

It's all about judgment. It's not always possible, or desirable, to be a Jesus or a Gandhi. But if we can't be as radical as they were, we could at least listen to what they were saying, and meet them halfway. So far, millions of people (including many who worship him) act as though they were trying to do the exact opposite of everything he said. Surely we could do a little better than that? These cycles of hate and violence tend to spin out of control. In an age where our weapons have gotten destructive enough to wipe us all out, we have to get better at breaking those cycles. If we don't, they'll destroy us. Maybe that's another good reason to love our enemies. As a sage named Pogo once said, "We have met the enemy, and he is us."

Posted by Ramblebrain at 8:52 AM