Huck's Dilemma: Mark Twain on the Heart Versus the Conscience

"In a crucial moral emergency a sound heart is a safer guide than an ill-trained conscience." - Mark Twain 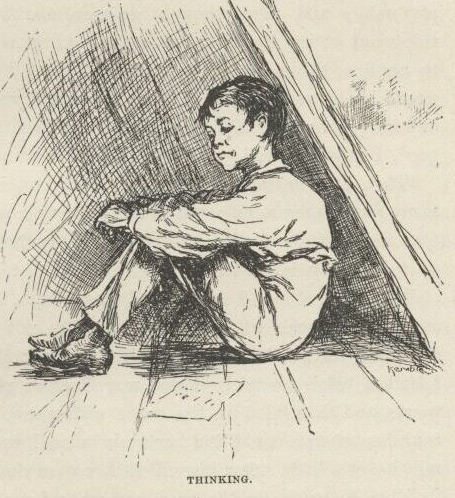 Today I came across the quotation above, and thought it sounded like very wise advice. It's from one of Mark Twain's notebooks, in which he reflects on the central moral crisis in Huckleberry Finn. In the book, Huck's friend Jim, the runaway slave who came down the river with him, has just recaptured--betrayed by King and the Duke, the two con artists they had been traveling with. Huck is trying to decide what to do, and as hard as it is for us today to imagine, his conscience tells him it would be wrong to help Jim. That's what he's been taught all his life. It's what they taught in Sunday school in those days. But his heart is saying something different.

Usually I do my own writing on this blog, but this time I'm going to let Mark Twain make his point in his own words. Why describe the maestro's music, if you can invite him up on stage to play?

First, here's the passage from Huckleberry Finn. It's a long quotation, but it's also one of the most powerful things I've ever read, so think it's worth it. Today Huck's reasoning and his use of the N-word are shocking to us (as they should be), but they're an accurate reflection of how someone in Huck's culture would have thought and spoke:


After all this long journey, and after all we'd done for them scoundrels, here it was all come to nothing, everything all busted up and ruined, because they could have the heart to serve Jim such a trick as that, and make him a slave again all his life, and amongst strangers, too, for forty dirty dollars.

Once I said to myself it would be a thousand times better for Jim to be a slave at home where his family was, as long as he'd got to be a slave, and so I'd better write a letter to Tom Sawyer and tell him to tell Miss Watson where he was. But I soon give up that notion for two things: she'd be mad and disgusted at his rascality and ungratefulness for leaving her, and so she'd sell him straight down the river again; and if she didn't, everybody naturally despises an ungrateful nigger, and they'd make Jim feel it all the time, and so he'd feel ornery and disgraced. And then think of me! It would get all around that Huck Finn helped a nigger to get his freedom; and if I was ever to see anybody from that town again I'd be ready to get down and lick his boots for shame. That's just the way: a person does a low-down thing, and then he don't want to take no consequences of it. Thinks as long as he can hide it, it ain't no disgrace. That was my fix exactly. The more I studied about this the more my conscience went to grinding me, and the more wicked and low-down and ornery I got to feeling. And at last, when it hit me all of a sudden that here was the plain hand of Providence slapping me in the face and letting me know my wickedness was being watched all the time from up there in heaven, whilst I was stealing a poor old woman's nigger that hadn't ever done me no harm, and now was showing me there's One that's always on the lookout, and ain't a-going to allow no such miserable doings to go only just so fur and no further, I most dropped in my tracks I was so scared. Well, I tried the best I could to kinder soften it up somehow for myself by saying I was brung up wicked, and so I warn't so much to blame; but something inside of me kept saying, "There was the Sunday-school, you could a gone to it; and if you'd a done it they'd a learnt you there that people that acts as I'd been acting about that nigger goes to everlasting fire."

It made me shiver. And I about made up my mind to pray, and see if I couldn't try to quit being the kind of a boy I was and be better. So I kneeled down. But the words wouldn't come. Why wouldn't they? It warn't no use to try and hide it from Him. Nor from me, neither. I knowed very well why they wouldn't come. It was because my heart warn't right; it was because I warn't square; it was because I was playing double. I was letting on to give up sin, but away inside of me I was holding on to the biggest one of all. I was trying to make my mouth say I would do the right thing and the clean thing, and go and write to that nigger's owner and tell where he was; but deep down in me I knowed it was a lie, and He knowed it. You can't pray a lie—I found that out.

So I was full of trouble, full as I could be; and didn't know what to do. At last I had an idea; and I says, I'll go and write the letter—and then see if I can pray. Why, it was astonishing, the way I felt as light as a feather right straight off, and my troubles all gone. So I got a piece of paper and a pencil, all glad and excited, and set down and wrote:


Miss Watson, your runaway nigger Jim is down here two mile below Pikesville, and Mr. Phelps has got him and he will give him up for the reward if you send.

I felt good and all washed clean of sin for the first time I had ever felt so in my life, and I knowed I could pray now. But I didn't do it straight off, but laid the paper down and set there thinking—thinking how good it was all this happened so, and how near I come to being lost and going to hell. And went on thinking. And got to thinking over our trip down the river; and I see Jim before me all the time: in the day and in the night-time, sometimes moonlight, sometimes storms, and we a-floating along, talking and singing and laughing. But somehow I couldn't seem to strike no places to harden me against him, but only the other kind. I'd see him standing my watch on top of his'n, 'stead of calling me, so I could go on sleeping; and see him how glad he was when I come back out of the fog; and when I come to him again in the swamp, up there where the feud was; and such-like times; and would always call me honey, and pet me and do everything he could think of for me, and how good he always was; and at last I struck the time I saved him by telling the men we had small-pox aboard, and he was so grateful, and said I was the best friend old Jim ever had in the world, and the only one he's got now; and then I happened to look around and see that paper.

It was a close place. I took it up, and held it in my hand. I was a-trembling, because I'd got to decide, forever, betwixt two things, and I knowed it. I studied a minute, sort of holding my breath, and then says to myself:

When I read Huckleberry Finn as a kid, the force of that passage was mostly lost on me. When I read it as an adult a while back, I felt like I had been punched in the chest.

Now let's turn to the full passage I found today, where Mark Twain is explaining how he saw Huck's dilemma (actually, he's writing to himself about what points to make in a speech on the topic).


"I should exploit the proposition that in a crucial moral emergency a sound heart is a safer guide than an ill-trained conscience. I should support this doctrine with a chapter from a book of mine where a sound heart and a deformed conscience come into collision and conscience suffers defeat. Two persons figure in this chapter: Jim, a middle-aged slave, and Huck Finn, a boy of 14. . . . . bosom friends, drawn together by a community of misfortune . . . . .

In those old slave-holding days the whole community was agreed as to one thing – the awful sacredness of slave property. To help steal a horse or a cow was a low crime, but to help a hunted slave. . . . or hesitate to promptly betray him to a slave catcher when opportunity offered was a much baser crime, and carried with it a stain, a moral smirch which nothing could wipe away. That this sentiment should exist among slave-holders is comprehensible – there were good commercial reasons for it – but that it should exist and did exist among the paupers. . . . and in a passionate and uncompromising form, is not in our remote day realizable. . . . It shows that that strange thing, the conscience – that unerring monitor – can be trained to approve any wild thing you want it to approve if you begin its education early and stick to it.

I was tempted to let Mr. Twain end this post there, because he can write circles around me, but I've learned that I haven't always made my point as clear to others as it seems to me. So, my point is this: Mark Twain was right. The world has seen all kinds of conscience-deforming dogmas that tell people not to let compassion get in the way of doing the "right" thing. Think of the fundamentalist Muslim fathers who think the right thing to do if their daughters are raped is to kill them to preserve the family's honor--even if it breaks their heart. Think of the medieval priest trembling as he orders a "witch" to be hanged, because he honestly believes it will save others from hell. Think of the young Nazi soldier weeping--as many did--the first time he is ordered to shoot Jews. His heart is screaming "NO", but his conscience has been taught not to let compassion override the "greater good" of racial purity. Think of all the 19th century Americans raised like Huck Finn. How many of them saw runaway slaves, and sympathized with them, but turned them in anyway--because they had been told all their lives that it was the right thing to do?

Finally, think about what we might be doing today that falls into this ugly tradition. Which of today's dogmas result in an ill-trained conscience? What hurtful "moral" decisions are being made today that future generations will look back on in horror? And how many of them could still be avoided if, like Huckleberry Finn, we have the guts to go with our heart instead of our conscience?
Posted by Ramblebrain at 8:56 PM