Dr. Evil and the Big Lie 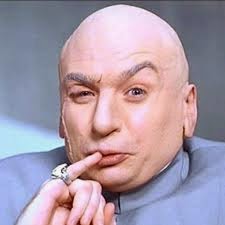 This isn't the post I want to write today. I want to write about the "religious freedom" bills that have been emerging in states around the country. I see these bills as yet another instance of what I rail against most in this blog--people doing hurtful things based on unproven religious beliefs.* But I've written post after post on that topic, and there's no sense in rehashing the same arguments again. So, I'm going to write what I don't feel like writing about. It's something I need to remind myself about, because it's hard for me to remember right now.

The thing is, most people I don't agree with--even most people I see as doing very hurtful things--don't do them because they're bad people. I know, crazy, right? It's easy, and even perversely comforting, to think our ideological opponents are simply bad. This way of thinking is so common, and so harmful, that I've started thinking of it as The Big Lie.

We like to think life is like a Hollywood movie, where there are good guys and there are bad guys (some people in law enforcement and the military actually use this terminology.) We like to think actual villains are common. What I mean by "villain" is a person who is bad, knows he's bad, and does what he does because it's bad. Think Dr. Evil; the kind of guy who revels in his own badness. But Dr. Evil is a caricature. Hardly anybody is really like that (though the phenomenon of the internet troll has convinced me a few are.) The fact is, many people--even the ones doing serious harm--do what they do because they think it's the right thing to do.**

Take the people currently proposing laws that would allow discrimination against gays on the basis of religion. My knee-jerk reaction is to see those people as Dr. Evils--as doing it just to hurt somebody. But my knee-jerk reaction is wrong. Some do just want to hurt people, but most are proposing such laws because they truly think they're morally right. They believe that refusing to participate in a gay wedding, or perhaps even refusing to serve a gay person at all, makes them a better person. That's hard for a liberal like me to process, but it is how they see it.

And here's the thing: it's hard for them to process the fact that we're trying to do what's right. They're just like us that way--if they're not careful, they'll start thinking we're simply bad people who like doing bad things. They'll start thinking of us as Dr. Evil. How many times have you heard conservatives say that liberals want to see the United States fail, or that they support abortion because they like the idea of killing babies? We know better, but it happens all the time. But then, it's also common for us to say the same things about them: that people who don't agree with gay marriage must hate gays, or that pro-lifers are motivated by a desire to oppress women. Yes, there are some haters and oppressors, but the fact is that most of them are motivated by things other than hate and oppression.

However counter-intuitive this may be, it's true, and it's not helpful to pretend it isn't. First, the Dr. Evil view is simply an inaccurate view of reality. Take pro-lifers, for example. If someone actually thinks each life is created by God and begins at conception, and that is their motivation for being pro-life, then it doesn't serve any purpose to claim they're motivated to keep women down. It's much more helpful to understand people's actual motivations than their imagined ones. (Some people seem to think understanding equates to approval, but that's just silly). Second, the Dr. Evil view of the other side perpetuates the nastiness of the culture wars we're seeing in this country, and has been the root of many of the wars throughout history. It's a very, very destructive impulse.

When we understand that most people on the other side are trying to do the right thing, it lets us see them in a more positive light, and maintain a little more empathy for them. It also means the situation isn't as hopeless as we may have thought, because we have common ground with those on the other side. We both, for the most part, want to do the right thing. How about that--something we actually agree on!

What we don't agree upon, unfortunately, is what the right thing to do actually is. That's where we need dialogue. If we mostly want what's right, then let's talk about what that might be. What doesn't need to happen is more demonization and name-calling. If we don't want them calling us evil, we need to stop calling them evil. The problem isn't that people on the other side are bad. The problem is that it's so hard to figure out and agree upon what's actually good.

And that is a great big horrible problem. The sad fact is, many of the worst things people have ever done to each other have been a result of trying to do what's right, not what's wrong. But that's a topic for another post. For now, let's focus on the fact that The Big Lie really is a lie. Dr. Evils are rare, and most people aren't trying to be bad. They're trying to be good, and that's very good news.

* I've realized lately that what bothers me isn't the target of this hurtfulness--gays are the currently preferred target, but there have been many others throughout history. What bothers me is the rationale--people basically saying "What you are doing is wrong, because this one particular ancient book says it's wrong." Some people will think I'm evil for saying that.

** At the very least, they convince themselves that what they're doing is justified. Even complete sociopaths like Pablo Escobar spend a lot of energy explaining their actions. If you read Mark Bowden's book Killing Pablo, you realize Escobar thought of himself as a great guy who was just misunderstood. This is a man who would kick handcuffed people to the bottom of pools, and once blew up an airliner because he wanted one person on it dead.