Blues for the Dire Wolf

I just got back from a conference in Indianapolis. I have to admit I wasn't that excited about going. Indianapolis? In March? How exciting could that be? But I was pleasantly surprised, as I often am when I visit new cities. As soon as the talks ended, I made a little pilgrimage over to the Kurt Vonnegut Memorial Library, where I gazed upon the clunky little typewriter where some of my favorite books were born. Then I headed over to the Indiana State Museum, where I had spotted a banner that said "Ice Age Giants: The Mystery of Mammoths and Mastodons." 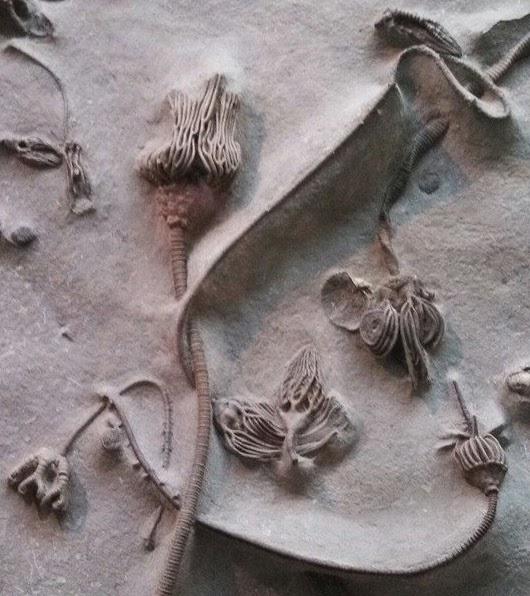 The huge, tusked skeletons were pretty impressive, as were many other relics thousands of times older, like the gorgeous crinoids in the image to the right. There are some really spectacular fossils under those Indiana plains.

But what really captured my imagination, and not in a comfortable way, was a 25,000-year-old dire wolf skeleton. Anybody who's read or watched the Game of Thrones series or gone through a Grateful Dead phase has heard of dire wolves, but they may be surprised to learn they really existed. In fact, dire wolves roamed the Americas from about 1.8 million years ago to the beginning of the current interglacial period, which began around 10,000 years ago. We think of such ice age creatures as evolutionary also-rans, but they were around ten times as long as our species has been so far, so maybe a little respect is in order. 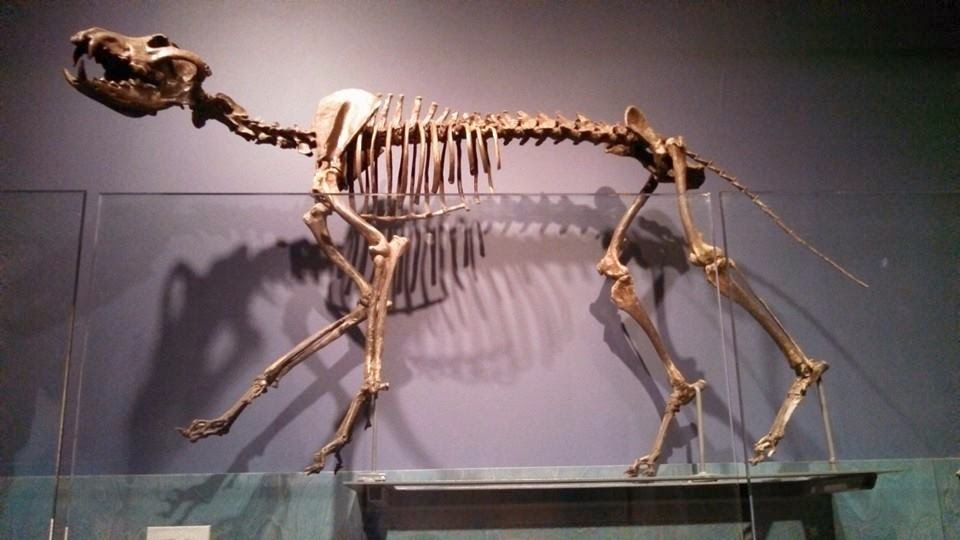 Dire wolves resembled the gray wolves that are still around today, but they were much more heavily built, often as massive as Saint Bernards. They also had shorter legs than gray wolves, as well as more powerful jaws, and somewhat smaller brains. While gray wolves can hunt everything from moose to mice, dire wolves seem to have specialized on the large mammals that were common in the ice age. And that may have been their undoing. Some scientists think they couldn't survive when the big Pleistocene herbivores they lived on--horses, camels, ancient peccaries, giant sloths, and so on--started to disappear. And those creatures may have disappeared, in part, as a result of overhunting by the first people in the Americas.

Living on large prey was a dangerous game on the individual level, too. Those big herbivores could fight back, and so could other predators that competed with dire wolves, like huge short-faced bears and sabertoothed cats. It's no surprise that many dire wolf bones show serious injuries--from prey, from competitors, and even from other dire wolves (they probably fought for dominance, like gray wolves). For dire wolves, being kicked, bitten, and clawed by animals much larger than themselves was just a fact of existence.

The dire wolf I saw in Indianapolis was no exception. Something had dislocated its hip. Its femor had rubbed a smooth spot on the pelvis, just outside the hip socket. That meant it had been displaced for months when the wolf died. The poor creature must have limped along all that time trying to keep up with the rest of the pack, surviving on leftovers and possibly the generosity of its pack mates.

Its death was equally tragic. Passing the entrance to a cave, it caught the scent of a dead animal inside--an extinct peccary, as it turns out. Limping into the darkness to find a meal it wouldn't have to run down, it stumbled into a pit--the same pit that had trapped and killed the peccary. Eventually, it died, I suppose from dehydration or exhaustion.

I stared at that skeleton for a long time. Those bones had once been a formidible and intelligent animal. What was going through its mind as it struggled in the mud at the bottom of that hole? How long did it take to realize there was no way out? Did it even have any concept of death? I don't know. I do know it would have been an awful way to go.

People have often listened to howling wolves and said they're "singing the blues." I doubt there's much similarity between the two activities, but who knows? Wolves ancient and modern have tough lives--if they do sing the blues, they have every right too. A fundamental theme of the blues is the injustice of life. Could a wolf feel a sense of injustice, to have survived that long with a bad hip, only to meet a slow death in a dark hole? I know I would feel pretty aggrieved. If it were me in that hole, you better believe I would be cursing that darkness. "Are you really going to let me die in here, Universe? You are really, truly, that pitiless? How dare you?!"

But it is that pitiless, and it doesn't care what we think. That poor creature did die in that hole. And its fate wasn't uncommon. Out in California, many other dire wolves met similarly tragic ends when they followed other animals out into the La Brea tar pits and got mired in warm, bubbling asphalt. Thousands of dire wolf skeletons have been dug out of those pits; their bones blackened by the tar. Nature, as I've said in another post, is like the "rough beast" in Yeats poem The Second Coming, with, "a gaze blank and pitiless as the sun." There's no rule in nature against cruel and unusual punishment. What happens...happens.

It's not that nature is unjust, exactly. It's just that justice and injustice aren't part of its makeup. At least not for the most part--there are exceptions. Ourselves, for example. We are part of nature, and a sense of justice and injustice is part of our makeup. Maybe it was part of the dire wolf's makeup, I don't know. In any case, the fact that our sensibilites rebel at the thought of meeting a tragic, undeserved end is actually a cause for hope. It means there is some sense of justice in the universe. We tend to look for it out there in wider realms of nature, but I suspect that's misguided. The only sense of justice in nature, as far as I can tell, is inside us, and perhaps a few other sentient creatures. That means if we want to look at nature's cruelty, cry foul, and try to find a way around it, we can. We can come across a trapped animal, for example, and help the poor thing out of there. But it's up to us, and us alone. That's surely true whether there's a God or not, because history has made it clear that unimaginable tragedies happen in either case. God didn't stop the Black Death or Holocaust from happening.

But we can, or at least we can try. Think of what an amazing thing that is. Dire wolves lived hard, scary lives for thousands of generations without ever having a way to improve their lot. Even if they had some sense of cosmic justice--even if they sang that kind of blues--they had no way of translating it into reality. We do. We've done it already, in fact--smoothing out some of the roughest edges in nature as well as our own culture (though the worst among us have just found ways to sharpen them). We've fought against natural horrors like disease, and human horrors like slavery, and with some real success.

When I think about things like the fate of that ancient wolf in Indiana, I start asking where the justice is--where the tiniest spark of kindness is--out there in the universe. But I think I'm probably looking in the wrong direction. That little spark isn't "out there" somewhere. It's inside us. And what it becomes is up to us.
Posted by Ramblebrain at 11:11 PM