"The universe is cool enough without making up crap about it." - Phil Plait 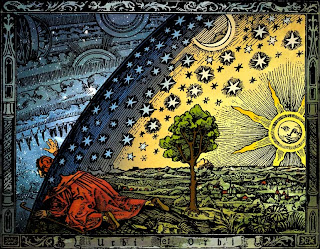 One of the most interesting things about being a librarian is that it lets you see what other people are interested in. The books you keep reshelving are the ones that strike people's fancy. Some of the books that fly off the shelves the most, at least in my library, have Dewey Decimal numbers in the 130's: Parapsychology and Occultism. That's where you find the books on psychic phenomena, astrology, ghosts, occult practices, and ancient aliens who built the pyramids (or even the moon, according to one book). People eat that stuff up. Every month or so I reshelve a book called Fairies 101: An Introduction to Connecting, Working, and Healing with Fairies and other Elementals. And every month I think, "I can't believe I'm putting this in the non-fiction section."

A closely-related genre that I'm always reshelving is alternative medicine--herbalism, homeopathy, acupuncture, crystal healing, and so on. Those check out at least as often as the books on mainstream medicine. Not all alternative medicine is a kooky as the notion that fairies really cavort in our gardens, but some of those books are pretty out-there, and the people that read them also tend to be drawn to the parapsychology and occult section.

The most common umbrella term for all these things, of course, is New Age. New Age is big business, and like most people in this country, I've met some very New Agey people. One thing that always fascinates me about them is that they seem to see New Age pursuits as a kind of enlightenment--as a means of spiritual growth; a pursuit of knowledge about the great cosmic mysteries. That always strikes me as odd, because it seems almost perfectly backward. In fact, you could make an argument that most New Age pursuits are the very opposite of enlightenment.

Let me explain. If you look at a shelf full of books on New Age ideas, or the kookier forms of alternative medicine, it's hard at first to see what they all have in common. What do ancient aliens have to do with psychic divination or telepathy? Why do the people who check out books on crystal healing also check out the ones on astrology? If you think about it, these are all very different ideas. All they have in common, I think, is an air of exotic mystery. They remain in the realm of the unproven, and outside the realm of mainstream science and medicine. They are, in other words, titillating. Not only that, but they can be personalized. A horoscope doesn't just  tell you about distant stars--it tells you what those stars mean for you. I'm convinced that more people are into astrology than astronomy because, as exotic and mind-expanding as astronomy is, it doesn't have that sexy air of magic and mystery, and it will never be about us.

That's why things like astrology seem like the very opposite of any kind of enlightenment to me. Surely a crucial aspect of enlightenment, whether it's spiritual or intellectual, is to see the wonder in the universe as it really is. It's about seeing the magic in the mundane, not ignoring the mundane because you're too preoccupied with exotica. Consider this: we have specialized organs in our heads that can detect a kind of mysterious energy. This energy pervades the universe and passes in waves through empty space. It can give us detailed information about the world, if we just open our eyes to it. No really. Those organs I'm talking about are our eyes, and that mysterious energy is called light. Light and sight are both entirely astonishing things, if you stop and think about them.

The problem is that we don't. Why are so many people more fascinated by unproven phenomena like auras and psychic divination than by the sense of sight? Because they experience sight every day, and because there are no great mysteries remaining about it. If they had been blind all their lives, and suddenly started seeing, then they would see just how astounding the sense of sight really is. On the flip side, if we were all psychic, and had grown up reading each others' minds, people would be bored with that, too. It's the mystery that grabs people. The problem is that it grabs them so much that they lose interest in the staggering wonders they've seen every day of their lives, and get stuck on exotic-sounding but fictional phenomena. That's not enlightmentment--that's distracted escapism. The real wonders are just that--real. It's just that people are bored with them.*

As I said, though, most of those real wonders aren't about us in any personal way, and that's another strike against them for many new agers. But that just shows another way that New Age thinking and real spiritual growth are opposed. Wouldn't real enlightenment involve some kind of transcendence of selfish concerns? New Age culture is far too self-focused to be considered enlightened. Once I was walking down the street in a city with a large New Age presence (I can't remember which one...maybe Boulder?) Anyway, I noticed a day spa offering various kinds of personal pampering, many involving manipulation of imagined "energies." The place was called Spa Enlightenment. I thought, "Yep, that pretty much sums up the whole mindset. Self-indulgence and fantasy as enlightenment."

Once again, I don't claim any particular enlightenment myself. But I can't help thinking truly enlightened people aren't to be found living in a pretty New Age paradise getting weekly chakra alignments. They'll be in some slum or developing country, trying to help someone besides themselves. And I don't think they'll talk much about horoscopes, crystals, or aliens. They won't be distracted by a set of ideas that have nothing in common except their air of mystery and titillation. They'll be too awestruck by the endless wonders they've been surrounded by all their lives.

* I'm certainly not saying there's no place in the world for fantasy or fiction. It's just that we shouldn't mistake fantasies for reality, or too get wrapped up in them to notice amazing things that really do exist. Fairy tales are great, but that doesn't mean there are fairies under my bed. I'm also not saying no New Age or alternative medicine idea could ever turn out to be valid and proveable. But if it does go mainstream, I bet a lot of people will lose interest in it, because it won't seem mysterious anymore. Finally, I'm not saying all people with New Agey tendencies are selfish or kooky. Some I know are much more compassionate than I am, but it's not because they read their horoscopes.
Posted by Ramblebrain at 9:47 AM