And the Truth Comes Limping After

"A lie will go around the world while the truth is pulling its boots on."
- Mark Twain 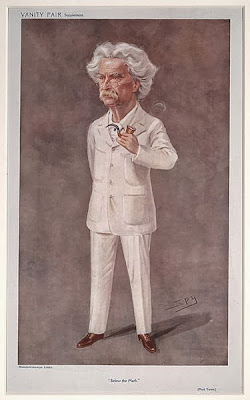 That's always been one of my favorite Mark Twain quotations. It's just so true. Except...it's not. It's a true observation, to be sure, but Mr. Twain never actually said it. A guy named C.H. Spurgeon did, in 1859. And he borrowed it from other sources, which can be traced back to 1710, when Jonathan Swift said, "Falsehood flies, and the truth comes limping after it.”

Here we have a delectable irony--a quotation about how fast lies can spread is itself a lie; one that has indeed spread around the world. It proves how true it is with its own falsehood. Or...something.

Anyway, I got an amazing lesson today about how true it really is. As I write, it's day three of the government shutdown over the Affordable Care Act (Obamacare). In a Facebook discussion today about Obamacare, someone illustrated their objections to it by linking to an essay by a Louisiana attorney named Michael Connelly called "The Truth About the Health Care Bills." Connelly lists several reasons he believes House Bill 3200 is unconstitutional. The only problem is, House Bill 3200 is not the Affordable Care Act. It's a different piece of legislation altogether, and it never passed. I don't know whether Mr. Connelly's analysis is correct, but that's beside the point, since it never passed anyway. It certainly shouldn't be spread as if it were a critique of Obamacare.

But that's exactly what was happening. When I looked at the Facebook link where Mr. Connelly's essay had been posted, it had been shared over 4,000 times since the day before...by people who thought it was about Obamacare. Many of them shared it with comments like, "Wake up people! Obamacare is taking away all our rights!!!"

Whether they are right or wrong isn't the issue here. The issue is that they were accidentally spreading misinformation, and spreading it fast--sharing the link every few seconds.

I watched the number of shares climb to 5,000, and then 6,000. Finally, I asked to join the Facebook group it had appeared on, called Repeal ObamaCare, so I could leave a comment on the post. I was accepted within 20 minutes, and posted a link to the Snopes.com article showing that the essay was not about Obamacare.

And then, nothing happened. People just kept on sharing it. In the 40 minutes after I posted the Snopes link, nearly 1,000 people shared the essay. Finally, the guy who originally posted the link said he would take it down, and he did, just before it hit 7,000 shares.

It was a small victory, but I'm not going to lie--it was sweet. Tilt at enough windmills, and you might knock a small one over.

Of course, as he said: "It's out there now." Seven thousand people saw that link and shared it without ever checking to see if it was legitimate. They didn't know enough about Obamacare to realize the essay wasn't about Obamacare, but they were sure they were against it, and that essay explained exactly why! Except it didn't.  But that didn't matter...it kept right on spreading. And for thousands of people, I'm sure it confirmed what they already believed in the first place.

As I said, though, my point here isn't whether Obamacare is good or bad. My point is about people's willingness to spread what they want to hear, without taking just a few seconds to see if it's true. I'm not sure the majority of people even care whether it's true, as long as it supports their point of view. I hope I'm being too cynical on that score.

One thing is certain, though, and that's how true the old adage about the speed of lies is, whoever said it. These days it's more true than ever. While the truth is pulling its boots on today, a lie can circle the world hundreds of times per minute, multiplying as it goes. The only way to prevent that is to actually care what's true--to prefer a truth we don't like to a lie we do. Lies are swift, tough, and almost impossible to kill.  The truth is fragile, plodding, and utterly precious. It needs all the help it can get.
Posted by Ramblebrain at 7:35 PM