I have an odd habit. I'm always watching for interesting flowers and insects, taking pictures of them, and posting them on Facebook--as if everybody thought they were just as fascinating as I do. And sometimes they do. The other day, a friend (who, unlike me, actually makes a living as a writer) suggested I write about some of the weird bugs I see. It seemed like a good suggestion. I've let myself get too preachy on this blog anyway, and besides, she's a professional and I should probably listen to her.

The only problem, though, is that if you look closely at the world of insects, what you see tends to be kind of horrifying. As Annie Dillard put it, "Fish gotta swim, birds gotta fly; insects, it seems, gotta do one horrible thing after another."

It's true. Insect behavior can remind nature lovers like me not to romanticize the natural world too much. Nature can be achingly beautiful, but it's also for the most part amoral. It's not cruel--cruelty requires consciousness--it's just blind to things like hope, pleasure and pain. In the poem The Second Coming, Yeats talked about a "rough beast...its gaze blank and pitiless as the sun." Most of the time, nature is just such a beast. 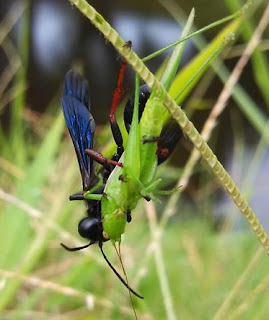 Sometimes it seems the like littler nature's beasts are, the rougher they get. For example, the other day I spotted this little drama on a blade of grass. A katydid was in the grip of Sphex nudus, the Katydid Wasp. In the picture it looks like the katydid is about the become the wasp's dinner, but actually...it's worse than that. Digger wasps like Sphex nudus sting their prey to paralyze them, and then bring them back to their nests, which are burrows in the ground. Then they deposit them in one section of the nest, lay an egg, and seal the chamber up. When the egg hatches, the larva will feed on its living larder. The wasps are parasites (parasitoids, technically, but we won't get into that).

This katydid may have escaped that fate, because the wasp got alarmed by my camera and dropped it. I like to think the katydid hadn't been stung yet, and that the wasp didn't come back. But I don't know. I also like to think katydids are absolute automatons, as incapable of conscious experiences like pain and fear as a wind-up toy robot. At least I hope that's true of the ones that run into Katydid Wasps. But I don't know that either, and I suspect it's not entirely true. And evolution doesn't care either way. If evolution is blind to pleasure and pain, then behaviors like this will evolve whether or not the victims are conscious of what's happening to them.

And evolve they do, over and over again. Among the Katydid Wasp's cousins are the similarly thread-waisted Mud Daubers. We called these Dirt Daubers where I grew up in Arkansas, and in my family they were considered the good guys of waspdom, because they almost never sting. Well, they almost never sting people. They do sting spiders, for the same reason Katydid Wasps sting katydids. Mud daubers build their little adobe nests and give each larva its own compartment, well-stocked with several paralyzed spiders for it to dine on. The Blue Mud Dauber's young mostly eat Black Widows. How's that for tough?

I discovered the "good guy" mud dauber's dark secret for myself as a kid, when my mom had me knocking old mud dauber nests off the ceiling of our porch. I broke one open out of curiousity, and dead spiders cascaded down my arm, as I did lively little dance of terror. Maybe is was the Tarantella.

Whatever their secrets, mud daubers have enemies of their own, and some of them are other wasps. I encountered one of these a couple of years ago. I heard a constant buzzing sound at my back door, and when I went outside to look, I found a mud dauber nest on the screen. On it was a little iridescent wasp, so pretty it could have been made by Carl Fabergé, busily chewing its way inside. That seemed a little odd to me, so I went back inside and looked it up. It turned out to be a Cuckoo Wasp, and like its avian namesake, it's a brood parasite--it lays its eggs in the nests of others. When the Cuckoo Wasp larva hatches it proceeds to eat the Mud Dauber larva, as well as its paralyzed guests. Naturally, the mother Mud Dauber doesn't appreciate that, and it will attack the Cuckoo Wasp if it catches it. But the Cuckoo Wasp is ready. Its jewel-like exoskeleton is armored, and it just rolls itself up into a defensive ball like an armadillo. The proprietor of the nest usually can't do much but pick it and bounce it from the nest. Whereupon it simply unrolls and tries again. The Cuckoo Wasp is a tiny little reflection of nature itself: gorgeous and amoral.

Life isn't easy, even for wasps tough enough to feed their babies paralyzed spiders. Sometimes it's downright embarrassing (or would be if wasps had the brains to be embarrassed). Like many insects, spider-hunting wasps can be fooled by an organism with no brain at all--an orchid. Most people have heard how some orchids mimic female bees or wasps. The haplessly horny males try to mate with the orchid, and end up with packets of pollen stuck to their bodies. But they don't learn from their mistake, so they deposit the pollen on the next orchid they try to get cozy with. It's probably a good thing orchid flowers aren't as big as humans, because some guys would probably pollinate them, and just imagine what those flowers would look like.

Moving on...Spider Orchids of the genus Brassia use a slightly different tactic. They really do look like spiders, at least enough to fool certain wasps. The wasps land on the flowers and start stinging them, trying to paralyze the "spider". The only result is that they get a bit of pollen attached to their heads, which they will deposit on the next "spider". The orchids get pollinated, and the wasps get nothing.

But not all plants are so hard on the parasitic wasps. The cabbage plant, for example, is their ally. The caterpillars of the Cabbage White Butterfly, as their name implies, like to eat cabbage. But the cabbage doesn't like--in an unconscious evolutionary sense--to be eaten. When it starts to get munched it releases a chemical that attracts parasitic wasps which attack the caterpillar. But they don't take it back to their nest. Instead, they lay their eggs inside the caterpillar, which goes about its business. The wasp larvae hatch and begin to grow inside it, feeding on its fluids but avoiding its vital organs. Finally, they tunnel out of the caterpillar's side and start spinning cocoons for themselves.

And then, as if this tale weren't perverse enough, things start to really get crazy. The caterpillar's brain has been altered by its ordeal, and it actually helps encase the wasp larvae in a mass cocoon, using its own silk. And then, then it becomes their guard caterpillar. The wasp larvae are vulnerable to attack by other parasitic wasps, which lay their eggs in them. The addled caterpillar lashes out at them when they try, but it's understandably weak by now, and soon dies. Many of its wasp attackers get parasitized themselves by smaller wasps. And get this--those smaller parasites may become the hosts for yet another species of parasitic wasp. This is called hyperparasitism--the parasite gets parasitized. Sometimes this can keep going, for four, five, or more levels, all the way down to bacteria that are attacked by bacteriophage virues. It's like a horror story version of Johnathon Swift's poem:

Ah, the web of life..it's not all peace and harmony. In fact, it can be pretty dreadful. After all, that famously disturbing scene in the movie Alien was inspired by parasitic wasps. Of the living things that can't make their own food, like plants do, parasites may be the most abundant.

But maybe things aren't as bad as they seem. Maybe none of the players in these little dramas are actually conscious, and they only appear to feel things like pain, fear, or anger. Maybe. But we can be pretty sure that other animals, like birds and mammals, do experience those sensations, and they (and we) can do some pretty awful things to each other, too.

That's where we, and maybe a few other animals, part ways with the rest of nature. That's the silver lining in all this. We can realize that others--both human and animal--have sensations and preferences, and we can alter our behavior to avoid to avoid causing unnecessary pain. Unlike nature, our eyes are not blank and we don't have to be as pitiless as the sun...or a wasp.

In the movie The African Queen, a drunk Humphrey Bogart tells a prim Katherine Hepburn, "A man takes a drop too much every once in a while. It's human nature." She replies, "Nature...is what we are put in this world to rise above." I don't know what we were put in this world for, if anything, and I think she could give nature a good bit more credit. But she's still got a point. As amazing as nature is, when it comes to things like compassion and ethics, we actually can rise above it.

National Geographic video about the White Cabbabe Butterfly being parasitized. Watch at own risk. No, seriously--it can't be unseen.

The Cuckoo Wasp: A Gorgeous Parasite