The Dog and the Hitchhiker: A Ghost Story

Last night I went to see a horror movie called the Conjuring. It wasn't the best I've ever seen, but it gave me a couple of literal shivers, so I guess it got the job done. It's one of those "Based on True Events" horror movies, in the tradition of The Amityville Horror. In fact, two of the main characters are Ed and Lorraine Warren, the real-life "demonologists" who also worked the case that The Amityville Horror was based on (rather loosely, it seems). In The Conjuring, the Warrens are nice, normal-seeming people, whose work just happens to require them to battle unclean spirits. Ed is a strapping, God-fearing, all-American kind of guy with a bit of a swagger, while Lorraine is unassuming and fearless. They're the heroes of the movie, which makes it clear they've fought their good fight in spite of all those skeptics who scoffed at them

Now, as anyone who reads the blog knows, I'm one of those skeptics. I figure there's no such thing as the supernatural, in either the religious or the New Age sense. Angels, demons, fairies, auras, and psychic phenomena all seem equally unreal to me. But I'm an open-minded skeptic, and I honestly don't think that's an oxymoron. If someone can give me hard evidence that I'm wrong, then I'll change my mind. Besides, I hate seeming like the wet blanket skeptic from some horror movie (especially since those guys usually get killed off rather horribly). Besides, I like a good ghost story as much as anyone else, and I've had a few odd experiences in my life too.

Have you ever felt like you had a premonition, or thought a coincidence was too unlikely to have happened by chance? I have. In my 41 years, I've had exactly three such experiences. The first was just silly. I was about 16, and my dad had me clearing brush on a lot he owned. I decided to walk to the motel in the next lot and get a Coke out of the machine, so I pulled the change out of my pocket--three quarters. I glanced at them there in my palm, and something possessed me to throw them all on the ground. They all came up heads, and they were all from 1967...pretty old quarters, even then. That's a pretty weird coincidence, for all kinds of reasons. What are the chances they would all be from the same year and come up heads? And what made me want to throw them on the ground? I never do that. Anyway, I looked at them, thought, "Wow, that's freaky", and went and spent them on my Coke. If they were lucky magic quarters, somebody else has them now. Maybe I should have waited for the beanstalk to sprout.

The second freaky coincidence happened on April 11, 2007. I was at my parents' house in Arkansas, and I woke up thinking about Kurt Vonnegut. That was odd, because I hadn't thought about him in years. He had been my absolute favorite author when I was in my late teens, but I was 35 in 2007. I was lying there thinking, "He's getting really old now. He surely won't live much longer." Then I got up and went downstairs, and my mom said, "Well I just heard on the radio that Kurt Vonnegut died." Later that day my sister, who was also visiting, looked at me and said, "So, Mom told me how you killed Kurt Vonnegut this morning."

That's two freaky, pseudo-psychic experiences in 40 years. They were pretty strange coincidences, but I honestly think they were just that--coincidences. Forty years is long enough for a few coincidences to happen just by chance. People do draw royal flushes every now and then, and that's explainable by statistics. Magic isn't necessary.

But let me tell you my ghost story. Or maybe it was just another dream, even though I was half-awake at the time. Whatever it was, for years afterward, my scalp would prickle every time I told the story. It was March 25, 1989, and I had turned 17 a few days before. That was the heyday of hair metal bands, and Cinderella was coming to Little Rock, which is 90 minutes south of my hometown. I wasn't a Cinderella fan myself, but my friend Dave was, and he made me a deal--if I drove, he would buy the tickets for both of us. That sounded good to me. Going to the big city without grownups was a big deal then, and David and I had a grand time.

We must have gone to eat after the concert, because it was around 2:00 AM when we finally headed home. By the time we got back to the foothills of the Ozarks, where the road gets curvy, Dave was asleep, and I was fighting to keep my eyes open. That's when saw a big, beautiful collie walking down the side of the road. We were nowhere near a town, or even a visible house. I wondered vaguely what it was doing out there, but I was too sleepy to think straight. So I kept on driving.

Then, after a couple more miles, I saw another, identical collie on the side of the road...just trotting along like the last one. That struck me as very odd, but once again, I was too sleepy to think about it much. So I kept on driving, curving down into a steep little valley toward the old Cadron Creek bridge.

Just as I started descending, I saw that collie again. There it was, on the side of the road, dead and decomposing.

That's when a little jolt of fear finally broke through the sleepiness. But I kept driving. Then, just as I hit that layer of cold air you find in those little valleys at night, I saw a hitchhiker. He was a couple hundred yards in front of me, and he just stepped out into the road like he didn't see my headlights. But he didn't seem to be getting closer to me, even though I was going pretty fast. As soon as I realized how strange that was--just before I crossed the bridge--the laws of physics kicked in again, and he was right in front of me. Looking across the hood of my car, right at me. And then he was gone.

I hit the gas and roared out of the valley, pulled over, and shook Dave until he woke up. "You've got to help me stay awake, man, I'm seeing things!" We drove a few more miles and stopped at an all-night convenience store. I got out and did jumping jacks to try to wake up, and then we headed on home.

The strange thing is, the whole thing startled me, but it didn't seem truly scary until the first time I told the story, and felt the hair on the back of my head stand up. But that stopped happening after a few years, and it just became a good spooky tale to tell. I still think I was just falling asleep at the wheel, and dreaming while I was half-awake. That's a much simpler explanation than ghostly hitchhikers, to say nothing of ghostly collie dogs.

But it's not like I know everything, and it's a weird old world, whether there's a supernatural or not. I hadn't thought much about that story for years, until today, when I was thinking about that movie last night. I was trying to find the real story it was supposedly based on, and ended up finding some creepy, sad articles about "exorcisms" performed by real clergymen. I was thinking about how different my naturalistic view is from someone who truly believes in demon possession. So much less scary. So I started thinking about my "paranormal" experiences, and decided it was finally time to write about them.

But then, as soon as I got home from work, I got a message on Facebook from my old friend Dave. He had attached a picture of his ticket from that concert, 24 years ago. "Remember this?" he said, "I kept the ticket stubs to every concert I ever went to....man, what a crazy night!" 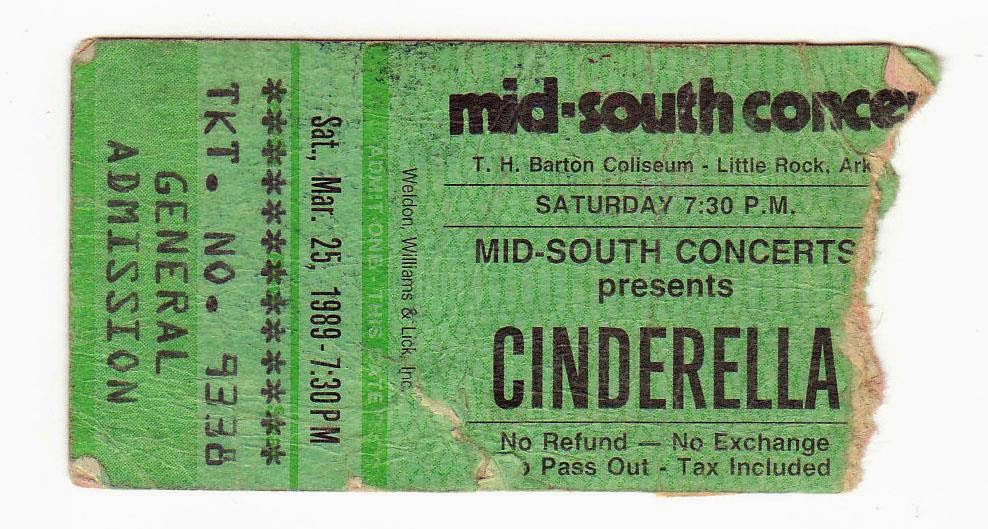 So, my third freaky "psychic" experience in 41 years was earlier today, just as I was getting ready to write this story for the first time. I don't know if it makes me or Dave seem like the psychic one, but it's pretty strange either way. In the three years or so that we've been friends on Facebook, how did he happen to send me a picture of that ticket today? If it's been roughly 1,000 days, that means the odds are 1/1,000. I know a few long shots like that are almost certain to happen in 41 years, statistically speaking. But who knows? It's still a weird old world.
Posted by Ramblebrain at 8:35 PM