Can You Say "Shibboleth"? 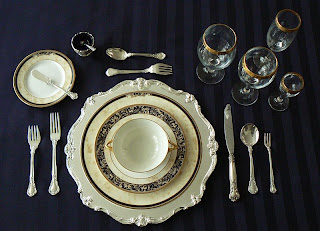 I've had the good fortune lately to go to a couple of fancy dinners. I call it good fortune because the company was good, not because the event was fancy. The food was not especially tasty, but it was presented with great style and pomp: it looked pretty. And then there was the silverware. My plate was surrounded by a garrison of forks, spoons, and knives. I had no idea which spoon to use for the soup, or which fork to use for the salad. Worse, there were glasses placed, with perfect symmetry, on each side of my plate. Which glass was mine? I chose the wrong one, of course, thus stealing my neighbor's glass. This breach of etiquette sent shock waves around the table, as each of my dinner companions had to use their neighbor's glass instead of their own. I apologized in my politest Arkansas accent, but if any of my dinner companions had decided I was a yokel, that probably didn't help.

All this would have bothered me if I were a more formal person. But I laughed it off, because I figure things like that shouldn't be taken too seriously. Knowing which fork to use--and speaking in a certain accent, for that matter--are nothing more than shibboleths. They don't have any particular purpose except to identify who belongs to a particular group...and who doesn't. Using the wrong fork immediately identifies me as someone who hasn't mastered the rules of etiquette. My accent identifies me as being from the hilly part of the south--not a region associated with sophistication in the average American mind. Linguists know that pronunciation is arbitrary, and has no intrinsic association with intelligence, but I can attest that people will judge you for having an accent like mine. The shibboleth is still in effect, no matter what the linguists say. But when I think about the origins of the term "shibboleth", I realize it could be a lot worse.

The word "shibboleth" comes from the Old Testament. In the late second millennium BC, the Israelites were still a set of quarrelsome tribes who hadn't yet united into the Kingdom of Israel. The Book of Judges tells how two Israelite tribes, the Ephraimites and Gileadites, went to war. The Gileadites defeated the Ephraimites, leaving many Ephraimites stuck in Gileadite country, east of the Jordan river. As they tried to cross back into their own country, the Gileadites stopped them at the river. The two tribes spoke the same language, but unfortunately for the Ephraimites, they had different accents. Judges 12:5-6 tells what happened next.


Whenever one of the fugitives of Ephraim said, "Let me go over," the men of Gilead would say to him, "Are you an Ephraimite?" When he said, "No," they said to him "Then say Shibboleth," and he said "Sibboleth" for he could not pronounce it right. Then they seized him and killed him at the fords of the Jordan. Forty-two thousand of the Ephraimites fell at that time.

A fateful word, shibboleth, but not because of its meaning. Depending on who you ask, it meant either "ear of grain" or "torrent". The point was that Ephraimites said it differently than Gileadites, and that allowed the Gileadites to identify their enemies. Shibboleths have been used in warfare more recently, too. In World War II, Allied soldiers would distinguish Japanese soldiers from other Asians by asking them to say, "lollapalooza." Since the Japanese language doesn't distinguish the "L" and "R" sounds, the Japanese would say "rorraparooza"--a dead giveaway, often in the literal sense. A fictional shibboleth appears in the movie "Inglourious Basterds", where an Englishman posing as a German soldier is caught making a hand-gesture a German would never use.

Not all shibboleths are so deadly, or even particularly nasty. Accents, in-jokes, fashions, slang, musical preferences--all these things can function as shibboleths. Many of them are pretty harmless, and just used to distinguish some subculture, often distinct only in its sense of fashion or music. There are all kinds of pop culture shibboleths I haven't mastered, but no one is particularly mean to me because of that (there's the occasional snotty hipster, but life is too short to concern oneself with the opinions of snotty hipsters).

However, the shibboleths of formal etiquette can get nasty (though not usually downright murderous). Knowing your table settings is a shibboleth indicating whether you know the rules of etiquette, and that is historically a way of indicating whether someone is from the upper or aristocratic classes, because only people from those classes had the means to learn such things. That's why etiquette is full of rules that don't really serve any purpose except to differentiate people who know the rules from those who don't. The word "etiquette" actually means "tag" or "label" in French. Having etiquette labels you as being from the refined classes. It's a behavioral badge, but a badge nonetheless.

Of course, etiquette can be more than just a set of shibboleths. It can also give people guidelines for being polite and thoughtful. But that purpose can be lost in the minutia of social rules. The shibboleth function of etiquette, when you think about it, is not very polite and thoughtful at all, at least to the people it excludes. Arbitrary social rules are also a burden for the people who know them, because life would be simpler (and often less expensive) if they didn't have to bother with them. People will work very hard to appear better than others.

It's odd how notions of good behavior are still bound up with old notions of class, or even old-world aristocracy. Think about the word "classy", as in, "That was a classy thing to do." "Classy" didn't originally mean "thoughtful and admirable", but "what a person from the higher classes would do". Today we think of a "gentleman" as a man who has good manners, but once it simply meant somebody who didn't have to work with his hands, or even work at all, regardless of how polite he was. The word "courtesy" originally meant "the proper way of acting at court." Americans still say certain behaviors are "noble" even though we have never had a class of noble men and women here. The aristocracy often weren't very noble, anyway, if by "noble" you mean "well-behaved and honorable". In fact, the oldest noble families in Europe first became nobles by fighting brutal wars.

The problem with confusing good, thoughtful behavior with class-based shibboleths is that class divisions don't necessarily reflect good behavior. In fact, most people today would say that a rigid, hereditary class system is a form of societal injustice. People aren't members of the upper classes because they have good manners, but because they were born in certain families, or made a lot of money and bought their way in. As the old saying goes, "Make money and the world will conspire to make you a gentleman." Making your money in a gentlemanly way is optional, and often counter-productive.

I don't mean to bash the upper classes here. I've known people from the upper classes who were truly noble, but I've also known some who used social niceties as a weapon to shame others.  I don't care how "well-bred" they are, those people can be as mean as scorpions in a skillet.

The point of all this is that we need to disentangle true courtesy from arbitrary shibboleths, and politeness from class and wealth. If some rule of etiquette makes life more pleasant, or shows thoughtfulness and respect toward other people, then let's keep it. If it's merely a shibboleth, good for nothing but distinguishing one group of people from another, then toss it in the garbage, where it belongs. I'm all for refinement and politeness when it serves a real purpose. After all, people can be pretty nasty creatures when they aren't taught manners, and the current parenting style ignoring rudeness strikes me as a horrible idea. But what's also a horrible idea is continuing to use arbitrary rules to distinguish people based on social class. If we could root out shibboleths masquerading as manners, and focus on actually being nice, thoughtful, and honorable, the world would be a simpler and kinder place. As Emily Post herself said: "Manners are a sensitive awareness of the feelings of others. If you have that awareness, you have good manners, no matter what fork you use."
Posted by Ramblebrain at 1:03 PM