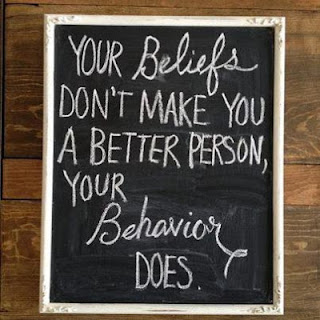 I haven't posted in a while, partly because of holiday travels, but mostly because I've been composing my thoughts in private messages to some of my friends. After I wrote a post about the idea of God, I got into discussions with some more conservative Christian friends, and very interesting discussions they've been. One thing that came up is the importance of beliefs versus actions. For many Protestants, it is belief alone, not actions, that determines whether you go to heaven or hell. If you believe that Jesus is the son of God, and that he died to atone for your sins, that is what gets you into heaven. Being a good person is important, but it's not what decides your fate in the afterlife. The official doctrine of many Protestant denominations is that if you live a good life, devoting yourself to helping others, but don't accept Jesus as your savior, you'll go to hell.

Clearly, whether this is true or not is a matter of no small importance (for the record, I don't think it is, for all kinds of reasons). So I was debating my evangelical friends about it. Why, I asked them, does God care so much about what we believe? Why doesn't he care as much about what we actually do? It was an interesting debate, but I don't want to discuss Christian theology in this post. What I want to talk about here is the relative importance of belief versus actions, not in a religious sense (because I'm not religious), but in the context of a secular ethics that doesn't require belief in the supernatural. Contrary to what the Mike Huckabees and James Dobsons of the world will have you believe, religion has no monopoly on morality.

My debates with my Christian friends put the issue of belief/action into sharper focus for me. I was asking them why belief itself is so important, but then I thought: Wait a minute...I think belief is important too! I'm always railing against the kind of relativism that says reality is socially constructed, and therefore truth is relative to one's culture. Sure, some things (money, national borders, etc.) are socially constructed, but not everything is. I think there is an objective reality, that it was around for billions of years before humans were, and that it's important for our beliefs to match that reality as well as possible.

But why is it important? Why do beliefs matter? Well, I've always maintained that they matter because we act on them. It matters whether you believe, for example, that animals are automatons who can't feel pain and suffering. If you believe that, you'll be more likely to treat them as such--leaving them out in the rain on a cold night, for example. If that belief is factually wrong (and I'm pretty sure it is) then your actions will be ethically wrong, because you'll be causing them suffering.

But while debating with my friends, I realized that if beliefs matter because of how people act on them, then actions, not beliefs, are doing the moral heavy lifting. Action is where belief runs into morality, isn't it? How can a belief you don't act on have a moral consequence? These questions bring me up short, because my knee-jerk attitude is that correct belief is important whether it has ethical consequences or not. I want to understand this world I find myself in as best I can, and to the extent that my beliefs are wrong, I have failed. If I went along with a some of my more New Agey friends and believed in astrology, and if that belief never had any ethical impact (which is unlikely) does that mean it's OK to believe in astrology? Lord, no! Because it's not true, doggonit! Why go through life thinking something that's not true, if you can help it?

Still, I have to admit that it's much more important to be right about beliefs with moral implications than those without them. If I told you that a hummingbird is a direct descendant of a dinosaur--that it IS a dinosaur, in strict phylogenetic terms--I'd be telling you the mainstream scientific theory of the origin of birds. Most dinosaurs went extinct, and the rest evolved into birds. But if you look at that hummingbird and say, "Dinosaurs?! No way!", it won't be the end of the world. You'll probably be an equally good person whether you believe it or not.

All these questions reminded me of the viral image at the top of this post, which I had seen making the rounds on the internet a few weeks before my debate over heaven, hell, and belief. I decided to get more of my friends' input on the whole question, so I posted the picture on Facebook, and asked: True or false? When I first saw the picture, I thought, "Wow, that's a good point". I even felt a little chastened, because I certainly do more thinking than charitable volunteering.  But not everyone agreed with me. One friend said "False", maintaining that "if you do the right thing for the wrong reason you're not being a good person". Another friend agreed, saying that if a racist and a non-racist act exactly the same way, the non-racist is still a better person. These seem like valid points to me, and I might not have thought about them otherwise (which is one reason I think dialogue is so important, but that's another blog post).

Another friend said the statement was false because your beliefs are what determine your actions. That's a good point, too, but it's not always true. For example, I truly think I would be a better person if I didn't eat meat, especially from animals raised inhumanely, like the chickens I see crammed into cages on trucks going down the interstate. But I love meat, and I hate to cook, and I go on eating meat at fast food joints. Yes, I set up an automatic withdrawal to donate a few bucks to the Humane Society every month, in the hope that they will work to make factory farming more humane, but I still eat those chicken sandwiches, with a small side order of guilt every time.  I'm NOT acting on my beliefs, and I don't act on them several times a week. So, it's true that beliefs are important, but it's not true that right beliefs necessarily lead to right actions, and that's really the whole point of the words on the chalkboard.

Another friend made an excellent point, which is worth quoting in full:  "I think perhaps it's worded wrongly to make what I assume is the intended point. It should say something like "beliefs themselves aren't enough to make you a better person. Behavior / action is required as well." I.E. you can believe we need to care for the homeless all day long, but actually have to donate to / volunteer at the soup kitchen for those beliefs to matter." This highlights a big problem I've noticed in our soundbite age: catchy slogans aren't subtle enough to capture the complexity of reality, but subtle, thoughtful statements, alas, rarely go viral (this might explain a whole lot about our world, and I'm not just talking about the internet era). Of course, her main point is that the words on the chalkboard present a false dichotomy. Both belief and action are important, especially since beliefs determine actions so much of the time. But the point of the picture is still a good one, and I'm glad it made the rounds. You can believe all day that poverty is awful, but that won't do anything unless you actually get up and try to do something to help.

So, am I actually volunteering at a soup kitchen? No. I'm sitting here writing, trying to work out what I believe, instead of getting off my butt and making myself useful. I tend to indulge my cerebral self, spending a lot of my free time reading and writing about life's questions, big and little. And to some extent, I think that's justified, because beliefs and ideas really do matter. People act on their ideas, so it's important to spend some time thinking about what you're going to act on.  Since that's true, thinking and writing can be valuable actions, because it can influence not only how you act, but how others act. Ideas aren't just powerful because they can influence one person's actions. Ideas spread and multiply, so one person can have an idea that can spread throughout the world, and cause a lot of good or a lot of bad. I've never had one of those ideas myself, but you never know, and besides, if I can gain a few insights this way, and perhaps encourage other people to have even better insights, or question potentially harmful beliefs, that's worthwhile. (That's an important point for this discussion, actually. When it comes to beliefs that cause harmful actions, the actions are the most important thing, but in a negative way. It would be better not to act on those beliefs).

Still, I probably spend too much time thinking, and not enough time doing. I've always liked the Buddhist parable where people are asking the Buddha metaphysical questions of the sort he had little time for: "Is the world infinite or finite? Does the soul exist after death?" He told them they were like a man who has been shot with a poisoned arrow. Before letting anyone remove it, the man wants to know who shot him, what family his assailant came from, what kind of poison is on the arrow, and so on. By the time he answers all these questions, he'll be dead. What he needs to do right now is forget about them, and yank that arrow out.

It's a good point. Endless speculation about unanswerable questions won't make the world a better place. Of course, some unanswerable questions become answerable if you keep at them long enough. "What is the sun made of?" was once unanswerable, but eventually it was answered (by science, it should be pointed out, not philosophy or religion). Still, speculation can only get you so far. Belief can only get you so far, even if you know for a fact that you're right. What makes ideas and beliefs matter most is the impact they actually have. I don't always remember this, but I should try to. And then I should try to do something about it.
Posted by Ramblebrain at 1:19 PM