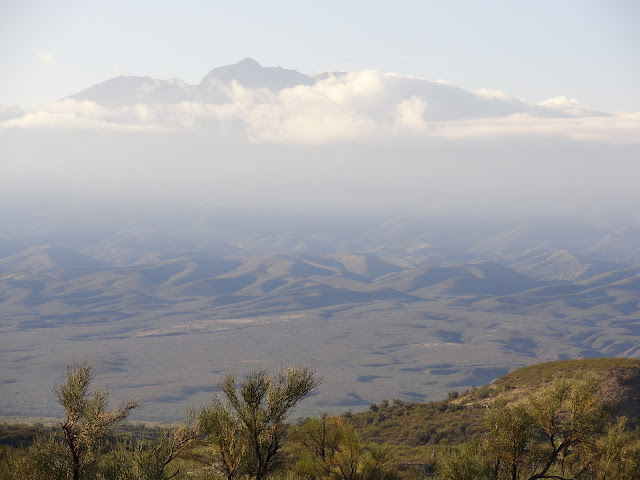 I read somewhere that people around the world dream of landscapes.  I don't know if that's generally true, but it's certainly true for me.  The most memorable thing about many of my dreams is their distinctive settings.  I don't hang out in peaceful meadows; I climb steep, scary mountains, and traverse sweeping, exotic terrains (flying across them, in the really fun dreams).  If my dream takes place in town, that town will have a dramatic setting; usually with steep hills and winding valleys.  The buildings and houses are exotic and colorful, and because the place is so hilly, they are stacked almost on top of each other. My dream environments are more like the settings for myths or fairy tales than real places.  But they also seem familiar, because I return to the same places in dream after dream.  This happens enough that I have the sensation there really is a "land of dreams"; that everyone constructs an entire region in their subconscious, and returns to favored places there when they go to sleep.  And I do favor certain kinds of places, whether I'm asleep or awake.

In fact, my dreams and my preferred environments seem to influence each other.  I like places that remind me of my dreams.  I love towns that really do have exotic architecture, colorful houses, and steep, winding streets.  I love broad, jagged landscapes.  The influence also goes in the other direction: if I visit a place that strikes some chord in my subconscious, it may become a landmark in the country of my dreams.  Even if I never go back to the real place, I return to the dream version again and again.  For example, below you can see the street I lived on for a year in St. Johns, Newfoundland, one of the towns where I go in my dreams.  I used to see this view out my living room window every day, and I still dream about that harbor, and those bright little houses marching up steep streets.  Once I woke up and there was a huge iceberg completely blocking the harbor entrance.  Why I don't dream about that, I'll never know.

Some dream researchers think dreaming about distinctive places serves a purpose.  They suggest we dream about landscapes because it helps our brains make maps of our environment.  I don't know if I believe this or not, because my landscapes don't much resemble the real world.  I dream of places I've never been, and if I dream I'm in a real place, my dream version of it isn't very accurate.  Sometimes it barely resembles the place at all, and it's almost always more vivid and exaggerated.  In any case, it's clear that dreams and landscapes are connected in our minds.  Dreams and learning may be connected, but exactly how is not clear.  I think the relationship between landscapes, dreams, and learning may be a triangular one, because there is also a connection between landscapes and learning.  Many of the lessons I've learned, and the insights I've experienced, are tied to particular landscapes; terrains memorable enough to be folded into my dreams.  Is it that I remember lessons better if I learn them in memorable settings? Or do I have more insights in such settings?  I don't know, but it's probably a bit of both.

In any case, I've lived in several places, many of them quite distinctive, so the lessons I've learned are linked in my mind to those settings.  When I was a sophomore in college, I worried my parents to death by transferring from a small college in Arkansas to the University of New Orleans.  I certainly learned some lessons there; for example, if there are a lot of parking places open on a certain street, it's because people know better than to park there.  Also, do not mess with New Orleans cops.  I learned the second one through observation, luckily.  Another thing I learned in New Orleans was how much I'm child of the hills.  When I was a kid in the Arkansas Ozarks, I went hiking through the woods every chance I got. I loved the beautiful cliffs, streams, and views, but somehow I still took them for granted.  I never realized how important they were to me until I moved to New Orleans; a city not only tabletop flat, but actually below sea level in most places.  What I really missed was being able to see off in the distance, as I could from my parents backyard in Arkansas: 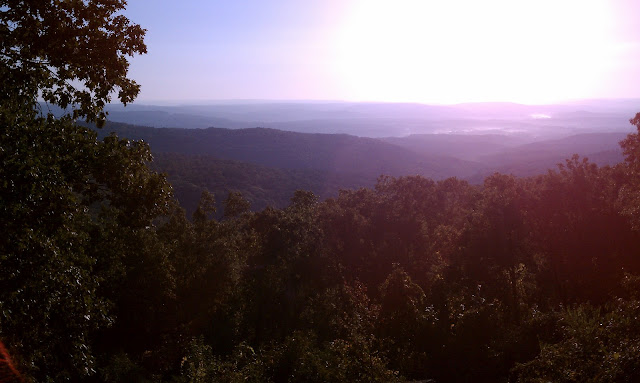 In southeast Louisiana, you're always down among the trees and the buildings, so you can rarely see very far.  I used to go and drive across the big Mississippi River bridges, just to be able to see off in the distance. (I should say that I've learned to appreciate New Orleans in recent years.  See this post, for example.)  After leaving New Orleans, I got back into hiking, something I hadn't done much since I hit my teens and starting thinking standard teenager thoughts.  I also became a little bit obsessed with mountains.  But the biggest mountains I had ever seen were the Appalachians. I wanted to see real mountains, with craggy, snow-capped peaks.  I got my wish the next year, when I spent a summer in Innsbruck, Austria.  Not long after I got there, I set out to climb one of the big mountains just outside of town.  A friend and I took off, with just a little bit of water, and started climbing...and climbing...and climbing.  When we finally got to treeline, we stopped to plot our scramble up the rest of the mountain, and to congratulate ourselves on having almost made it. It looked like just a couple of hundred feet to the top.  Then I noticed some movement in one of the high, nearly vertical meadows near us.  It seemed to be a group of small animals milling around.  Voles? Marmots?  I borrowed my friend's binoculars, took a look, and then took a seat.  They were mountain sheep--animals bigger than me, and they looked like specks against the mountainside.  My whole visual frame of reference shifted, and the mountaintop had instantly grown by a factor of ten.  It wasn't a couple hundred feet to the top; it was a couple thousand.

The mountain was just too big for my brain to process correctly.  My friend and I were thinking we had just enough time to get to the top and get back down before dark, but now we knew we would never make it.  I was actually a little relieved, because I was exhausted (I had also learned that day how hard it is to climb a real mountain).  While we talked about turning back I scanned the slopes, looking for more wildlife, and saw a quick flash of color.  Sweeping the binoculars to catch up with it, I saw a guy on a mountain bike. Hundreds of feet above me.  Here I was, just realizing this mountain had defeated me, and there's a guy way up above me, who peddled a bicycle up there.  I shook my head, and we started downhill.

Austria made me even more obsessed with mountains than I had been before.  When I got back to the states, I was dying to see the Rockies.  I was especially keen to see Montana.  I got both chances a couple of summers later. A friend of mine was going to Montana for the summer, and asked if I wanted to ride out there with her.  We took the long way--straight west from Arkansas to Albuquerque, and then north, following the Rocky Mountains through Colorado and Wyoming.  I didn't expect to be very impressed by New Mexico.  I was wrong.  West of Amarillo, in the high, flat country of the Texas panhandle, I started thinking that the the fabulous western landscapes I had heard about were all a big lie. It was just plains all the way to the California coast, and after all this driving, we were surely almost there.  That's when we came to the edge of the high plains, and my world got bigger again,  The landscape dropped hundreds of feet, giving way to an unbelievable vista of mesas and escarpments, visible for at least a hundred miles into the distance.  I had never seen New Mexico before, and now I was seeing a sizable chunk of it all at once.  And that's not even a particularly impressive place, by western standards.  People talk about the wide open spaces out west, but you can't fathom just how wide they really are until you see them.  It's impossible to capture in a photograph:  I've never seen a picture that does the experience justice.

Once again, I was stunned by the vastness of the world.  I stayed stunned all the way to Montana, which was as beautiful as I had imagined, just....bigger.  I've been stunned by the western United States ever since.  It seems larger than life, like a place for gods or giants.  Whenever I'm out there I always have a vague sense that I'm dreaming, because surely the world doesn't really have such extravagant landscapes.  But it does. 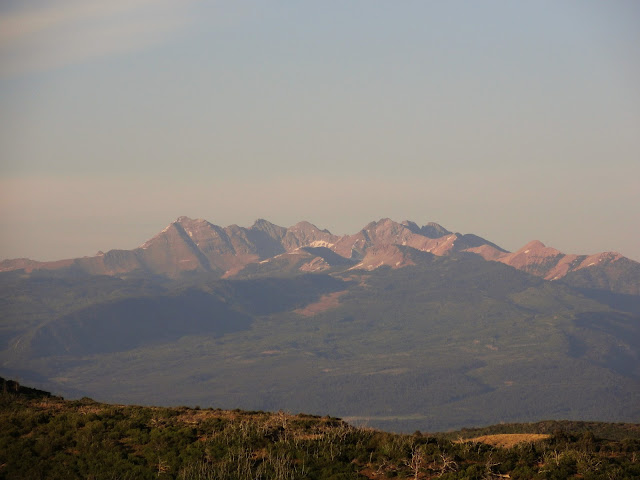 Years later, I lived in Colorado, and never got tired of the wild terrain, and all the fun activities it made possible.  For a while I had a job traveling every day in the Colorado Rockies and northern New Mexico.  I've been pretty much everywhere in that area, and most of it is stunning. The towering mountains in Colorado always made me hum Wagner's Also Sprach Zarathustra, beating imaginary tympani on the steering wheel.  But I was on the road four nights a week, and it got downright lonesome.  Those mountains and vistas were beautiful, but they don't offer much company--another landscape lesson.  The job wasn't very satisfying, either.  Finally, I hit ice on a mountain road with no guard rail.  While spinning 360 degrees, wondering if I was going off the edge, I decided to change careers.  I resolved to go to library school, and started looking around for one that would accept me for immediate enrollment that January.  That turned out to be LSU, back in Louisiana. 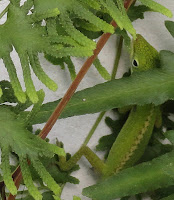 Now I work as a librarian in the swamp country in Louisiana. Louisiana doesn't have mountains or vast, craggy deserts, but I've learned to appreciate its other charms: great music, fun people, and interesting plants and animals.  Louisiana has made me slow down and change my focus, noticing the grandeur of small wonders like dragonflies, lizards, and wildflowers.  In fact, living in this landscape has taught me yet another lesson. I may not know all the secrets to happiness, but I know one for sure: appreciate small, everyday wonders, because you can find those anywhere.  Grab a magnifying glass and head for the back yard.  You'll find something that amazes you.  It's a good thing to have learned.  But I still get out west every chance I get, out to the country of my dreams. 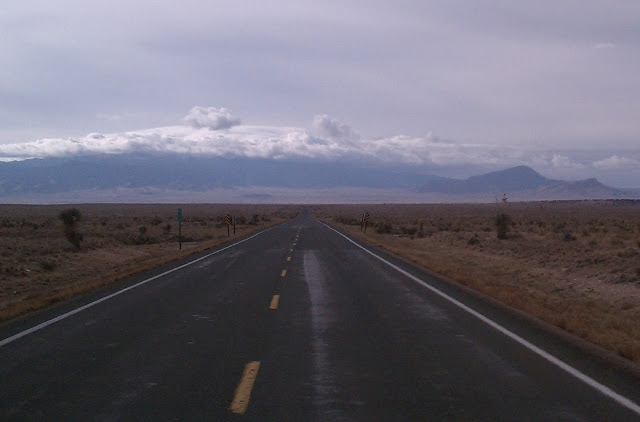