Sketches on the Shore

The water at Grand Isle, Louisiana isn't clear or blue.  It's brown and murky, filled with sediments collected from across half the United States by the Mississippi River system, which empties into the gulf just east of here.  I was chest deep in that water, about a hundred yards offshore, when I glimpsed a dorsal fin sinking beneath the surface and vanishing, about ten feet from me.  I stopped breathing, waiting for it to reappear.  When it did, I heard its owner exhale, so I exhaled too.  It was a dolphin.  I hadn't really thought it was a shark, because I had already seen several dolphins in the distance that morning.  But it was good to be sure.  Still, as the dolphin's two companions revealed themselves, I realized I was out of my element with three large wild animals.  With their permanent grins, that childlike melon on their foreheads, and all the "Flipper" stereotypes, bottlenose dolphins seem friendly.  And they usually are, but they're capable of ganging up on sharks and killing them, and they've been known on rare occasions to attack humans.  I considered that fact as one torpedoed straight at me while sinking into the murk.  My skin tensed in anticipation of contact, but it didn't come. These dolphins weren't really interested in me. Grand Isle dolphins probably don't get very excited about encountering humans, since they see them all the time.  But they did circle me a couple of times before going on their way.

I turned toward the beach, still grinning like a fool from the encounter, and noticed that a big, dark cloud was piling up over the land, looking baleful.  It was a gorgeous sight itself, and I was admiring its fleeting columns and canyons when, way up in the cloud, I saw a funnel cloud descending.  I stared at it dumbfounded.  The dolphins had already put me in a surreal frame of mind.  Now I felt like I was having an old school religious vision; as if I were about to see Ezekiel's wheels, or Zeus come to smite someone who had provoked his wrath. 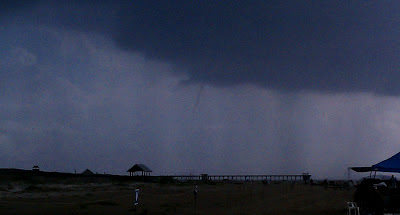 By then the funnel had turned into a full-blown waterspout, skating down the pass between Grand Isle and Grande Terre Island, to the east.  When it got out into the gulf, its narrow funnel was sheathed at the bottom with a wider funnel of mist.  The point of contact with the water looked like a sustained explosion, which I suppose it was (in a roundabout way).  A handful of ships were waiting to go through the pass, but they were keeping a very respectful distance.  Waterspouts aren't usually as powerful as tornadoes, but they can overturn a big boat.  A couple of days after I left, a least four waterspouts appeared at Grand Isle, and one of them made landfall, turning into a full-fledged tornado and doing some minor damage.

After a few more minutes, the waterspout and everything else in the distance vanished as a wall of rain hit the beach.  I crawled into my tent to wait out the storm.  No more than five minutes had passed between the dolphins and the waterspout, but they were some of the most exciting minutes of my life.  That was a pleasant surprise, actually, because I hadn't expected much from this trip.  I had come to Grand Isle the day before because it's one of the few places to camp in southeast Louisiana.  You can't call it a beautiful beach.  The sand is brown and muddy, just like the water, and the horizon is lined with oil rigs.  When I got there, the tent camping area of the beach was crowded, and I got the very last space.  Walking past the other campers to my site, I noticed some of those scary types you always seem to run into at state park campgrounds.  One dodgy-looking character had white supremacist tattoos across his potbelly, which was not actually white, but more of a deep sunburned pink (those guys are never prime specimens of any race, I notice).  Anyway, my neighbors at the next campsite were a step up from him.  They were friendly, and invited me to come have barbecue, but I had already eaten, so I politely declined.  But they got good and drunk around sunset, pulling out a boombox and blasting some irritating screech-rock.  One of the women seemed to have a three F-word per sentence rule.  So I grabbed a towel and walked down the beach, away from the campsites. 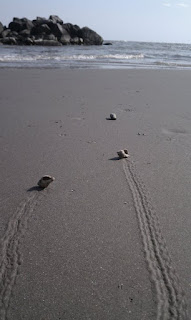 That's when I realized the trip was going to be worth it.  The sun was setting back behind the beach, and it was giving the clouds that kind of glow that's so vibrant that an accurate painting would look tacky.  In real life, of course, it's gorgeous (can nature look tacky?).  The tide was low, and a mother plover was leading her babies out onto the wet, mirroring sand to look for food.  A squadron of brown pelicans glided along the beach. There's something primal about the way pelicans fly, that always makes me imagine I'm looking at pterosaurs gliding along a Jurassic shoreline.  Of course, all birds are descendents of dinosaurs (not pterosaurs), but seabirds and wading birds show it more than sparrows or robins.  Maybe it's their long necks?  Anyway, pelicans have been around for 30 million years, so they're plenty ancient compared to us humans.  The beach was also littered with small spiral shells.  They looked empty at first glance, but the skittery claw tracks gave their current occupants away as hermit crabs. These are astounding beasts--crustaceans that have evolved an asymmetric, spiral-shaped body, so they can live in a shell created by another animal.  Hermit crabs date back to at least the lower Cretaceous, around 130 million years ago.  They're old enough that they once lived in the shells of ammonites; extinct animals that looked like a squid with a shell.

The full moon rose as the sun set, scattering its light off the waves and making it bright enough to walk around the hermit crabs. It was a fabulous way to spend an evening, and I hadn't even seen dolphins and waterspouts yet.  Of course, taking a trip to the beach to forget the stress and chaos of the modern world is one of the biggest cliches out there.  But it's a cliche because beaches do have an unusually powerful psychological impact, for all kinds of reasons.  Once you get away from the crowds, beaches have an eternal, timeless feeling.  The waves roar and crash rhythmically, unceasingly, as they have since the continents formed billions of years ago.  The oceans are where life first emerged, so it's no wonder that looking at the ocean gives us a sense of looking at our deepest origins.

Then there are the metaphors that are simply inescapable at the beach.  The beach is where two worlds meet, and we look out from our landlubber world, and imagine what's out there.  "Here be dragons", as the old mapmakers said.  There's also mystery in the depths.  What's down there under those waves?  Krakens?  Dragons?  Probably not, but there are plenty of things just as fearsome or awe-inspiring. The first time I saw a whale, from a beach in Newfoundland, I was so stunned I almost had to sit down.  A creature the size of a city bus had just appeared from the depths--who wouldn't be stunned?  Its back emerged from the water, and just kept on emerging, as I thought, "It can't really be that big, can it?"  But it was.  Ever since then, I've had occasional dreams of being on a boat, with huge shadowy whales swimming below me.  Of course, this is another metaphor.  Our unconscious mind is the deep, dark ocean, and we only rarely glimpse the creatures that live there, when they break the surface of consciousness.  Maybe our unconscious minds see themselves in the oceans, or the oceans in themselves, and in dreams they spiral inward like the body of a hermit crab.

Of course, part of a beach's impact may be purely physiological.  It's likely that the rhythm of the ocean waves captures the rhythm of our brain waves, putting us in a relaxed, meditative state of mind.  Staring off into the distance relaxes our eyes, and contributes to the same reflective state.  That distance, and the hugeness of the ocean, doesn't exactly make me feel small, but it does give me get that meditative sense of merging with my surroundings, feeling--or rather realizing--that the boundary of my self is not the same as the boundary of my skin.  People who study such things call this an "oceanic" feeling, and it's no wonder.

But the ocean isn't always relaxing.  It's dangerous, and we know it.  People have drowned at the very beaches I was admiring, sometimes swept out to sea by rip currents more powerful than the strongest swimmer. You can escape a rip current by swimming parallel to the beach, but that won't help with a shark, and sharks are surely at the back of everyone's mind. Once I was body-surfing at the beach in Florida.  A big wave came up, sucking the water at my feet back toward it.  As I got ready to drop down and start swimming along with the wave, I looked into the wall of water and saw the shadow of a fish as big as me.  It was swimming longways down that wave, totally at home.  As I stood there thinking about sharks and barracudas, the wave knocked me over.  I went and sat on the beach, rattled and coughing, reminded that there were things out there that might see me as dinner.

That was over 20 years ago, and I still remember it every time I swim in the ocean.  But I keep going back, and I don't even mind that it scares me.  In fact, I'm glad.  It's good to let nature scare you sometimes, to let you know that out there beyond our city ordinances and air conditioners, the natural world is still a wild and mortal place.  I'm not a religious man, but I think it's a sacred feeling--if not always a comfortable one--to stare into a world so much older, bigger, and more powerful than we are.  It's this sacredness that the drunk, foulmouthed people on the beach were missing.  They should have shut up and paid attention for a while.  It's not that I have anything against partying on the beach.  It's just that we need to remember to stop and look at where we are when we're in places like that.  We need step away from the crowd--at least for a while--and rediscover our sense of the sacred; of a world older than humanity.  Everybody, whether traditionally religious or not, needs to be able to stare out at the sea and be awestruck.
Posted by Ramblebrain at 10:37 AM