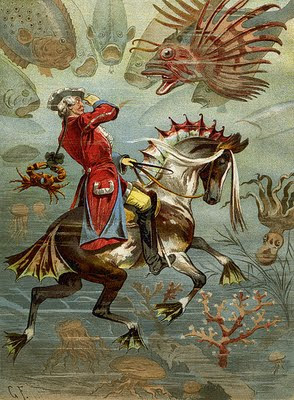 I came home from work feeling like I'm getting a cold.  I crashed on the couch at 6:30, and then woke up at 11:30.  Since I was (and am) half-awake, I thought I would read a part of a book about dreams.  I just read a chapter about the common themes in dreams.  Apparently, being chased is one of the most common dream occurrences.  Being naked or underclothed in public is also extremely common, as is dreaming of being unprepared; such as having to take a test and realizing you haven't been going to class or doing homework.  Since I'm half-awake, I think now would be a good time to list some common themes in my dreams.  I'm going to minimally edit what follows, to preserve the loose-association style.  Not all blog posts have to be fully-baked, do they?

I am, in fact, often naked or just in underwear in dreams, although I don't recall these dreams very often when I'm awake.  When I do remember such a dream, then I remember that I have had a lot of dreams like this.  In the dreams, I'm walking around without nearly enough clothes on, but it's a more minor embarrassment than it would be in real life.  It's almost like an inconvencience:  "Here I am again in my underwear.  Sigh....".

I dream about towns a lot.  Interesting, quirky towns, with colorful houses, and steep streets.  These towns are hilly, with a very up-and-down, three-dimensional character.  The houses are stacked up the hillsides, and the streets are windy.

Occasionally I dream I have super-powers, often Spiderman-like (I'm a Spiderman fan from way back).  In these dreams I can usually jump very far, and I'm moving between closely-spaced buildings like Spiderman, not swinging on webs, but leaping, grabbing ledges and poles, swinging, and clinging to walls.  Once I dreamed that I was on top of a tall building, and I jumped off, and would drop several stories, grab a ledge to catch myself, and then drop again.  It was really fun.  Usually, I wake up from the superhero dreams very disappointed to find my superpowers gone.

I have related dreams where I have amazing abilities, but don't think of them as being "superpowers".  Once I had a dream where I was in a big field, with boulders scattered about a hundred feet apart.  I could jump from one to the other.  Once again, big fun.  I rarely have dreams where I can fly, although sometimes I have dreams where I can sort of swim through the air by moving my arms and legs. I had a dream once where I was in a hallway, and there were a several dogs leaping up at me.  I was able to swim-fly and stay above them, near the ceiling.

Quick listing of other themes:

Mountains:  Steep, cone-shaped mountains, smaller than many real mountains, but still intimidating, because of their steepness.  Similar to Pinnacle Mountain in Arkansas, or Cuckold's Head in Newfoundland.  Just a few hundred feet tall, with rocky or grassy slopes.  Not many trees.

I've had a few dreams about the writer Annie Dillard, after reading Pilgrim at Tinker Creek (she's brilliant, and in the picture in the edition I had, quite attractive).  In one, she was a singer-songwriter, playing music I found really profound.

Sometimes I dream of reading, but I can't really read, because the words keep shifting and morphing on the page.  Sometimes I dream about finding a book or series of books that is exactly what I'm looking for.  I used to be fascinated by A.B. Guthrie's books about the west, especially the first one, The Big Sky.  Once I dreamed I had found a whole series of books about mountain men, very much like The Big Sky.

This may be different from dreams, but sometimes as I'm going to sleep, I become aware of mental conversations I am having with myself.  I get the sense these were ongoing, and I simply started paying attention to them, perhaps because nothing else was distracting me.  Could it be that our minds really do have these internal conversations going on much of the time, but we only become aware of them as we're going to sleep?  I read a quote from Jung somewhere that said dreams are like the stars.  They are there all the time, but we can only perceive them at night, when the bright sunlight of daytime concerns fades away.  I need to find that quote.

A related thing is the crazy hypnogogic thoughts you have when you are falling asleep or waking up.  They are usually wildly illogical, but they may seem to make excellent sense at the time.  As I've gotten older, I've learned to recognize these as signs that I'm falling asleep.  I've recently noticed weird thoughts about my alarm clock (cell phone), as I'm waking up.  When I was thinking about buying a car, I was thinking about whether to hit snooze again wondering "Ten minutes.  Can I afford that interest rate?"  Lately, I've been really interested in language and linguistics.  I was sleeping late, and kept hitting snooze, and having weird, half-asleep thoughts each time.  I was thinking about the word "snooze", and getting it confused with the word "doze".  I was thinking of snooze have the past tense of "snoze", and thinking doze should have some other tense of "dooze".  All this seemed very important at the time.

Sometimes dreams, and the weird falling-asleep thoughts, can seem very meaningful, even if they turn out not to be in waking life.  Once I had a dream where I was thinking about the line in the Bob Dylan song "Subterranean Homesick Blues", that says "The pump don't work cause the vandals took the handles".  I decided that he was talking about the Vandals, as in the marauding Germanic tribe.  And somehow that explained everything.

Sometimes a have dreams about St. John's, Newfoundland (I lived there for a couple of years).  It's one of those hilly towns I like to dream about.  It also has a harbor in the middle, and sometimes I dream that there are whales in the harbor.  I saw whales in Newfoundland, but never in the harbor.  Still, they are one of the most jaw-dropping sights I've ever seen; the way they emerge from the depths, and they are so huge that their back comes out of the water, and just keeps on moving past you.  Like a city bus suddenly surfaced and then dove again.  Somehow this seems to resonate with my idea of waking versus sleeping consciousness.  The unconscious is that mysterious, dark realm under the water.  Waking consciousness is whats above the water.  Sometimes huge, fantastic creatures emerge from the depths, and surface, and let you glimpse them before plunging into the depths again.  Could dark realms, such as underwater or underground, play a role in dreams because it is the way the mind sees its own more mysterious regions?

I also have the test anxiety dream.  In those dreams, it's the end of the semester, and I had forgotten that I was even supposed to be going to this particular class.  It's almost always a math class, because I hate math and am terrible at it.

Another anxiety dream I have, which evokes a vague sense of embarrassed despair, sort of like the "naked in public" dreams, is a dream that I have had to go back to high school.  I flunked out of college, and had to finish high school.  This is more relevant for me than for most people, because I actually did leave high school after my junior year, to go to college.  I didn't graduate high school, and a lot of people thought I would regret it.  I didn't.  But that gives it the extra layer of embarrassment, because in the dreams I'm back amongst all the high school people, and many of them have this "I told you so" attitude about it.  Horrifying.

Some things in waking life seem very dreamlike to me, whether or not I dream about them.  Subways seem incredibly dreamlike.  The way they move, much more soundlessly than you expect for something that big.  Also the way both ends look the same, so as they leave the terminal they look like they are going backwards, and the film in playing in reverse.  The way the air pressure changes in the terminal when they arrive and depart.  The way, when you're on a subway, that the lights and scenes you are passing flash on and off, alternating between light and dark.  Of course, subway terminals are underground, so that makes them resemble real dreams.  The way you descend into the depths, on escalators, which give you a dream-like sense of disconnected motion anyway.  One of the most dreamlike things I've ever experienced is taking an really long escalator (like 250 feet) into a deep underground subway terminal in Hungary.  There was a woman talking on the intercom in Hungarian, which sounded exotic and sort of Dracula-sinister to me (Yeah, I know Transylvania is in Romania, not Hungary, and Romanian is nothing like Hungarian).  Anyway, I don't think I've ever dreamed about a subway, that I can recall.  I just feel like I'm dreaming when I'm riding one or waiting for one.

The western United States, with its unbelievably wide, often freakish landscapes, also makes me feel like I'm dreaming, because it seems so much larger than life.  You're constantly half-thinking that it can't be real; it's too big.  But it is real.  It's just too much to wrap your head around.  Before I ever saw the west, I had dreams about steep hills, and dark valleys, like in Arkansas.  After I saw the west, I kept on dreaming about the hills and valleys, but I also started dreaming of vast western-type landscapes.

Of course, I often dream about interactions with other people.  But this opens a whole new realm, which I'm too tired to get into right now.

OK, now I'm more half-asleep than half-awake.  Which only makes sense if you are half-asleep.  So I'm going back to bed.  Maybe I'll post this in the morning, and ask people what they dream about.  How about it, tomorrow morning people?  What are some of your dream themes?
Posted by Ramblebrain at 12:00 AM